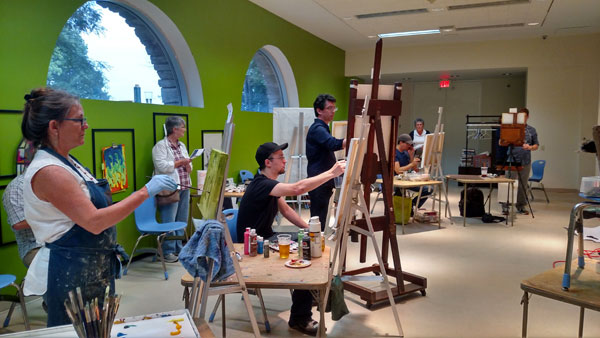 **Rescheduled for Wednesday, July 31** – Plein Air Landscape
Inspired by John Sloan, join artist-in-residence Takeyce Walters for a workshop that focuses how to reproduce the colors seen in the plein air landscape. Students will create their own plein air paintings and learn how to recognize shifts of color concerning temperature, value, and saturation.

August 17 – Social Realism
Artist-in-residence Corey Pitkin leads a class that looks at how after centuries of art being the curio exclusively of the upper class, some artists in the late nineteenth century began depicting the lives of common people. With the rise of the Ashcan School in America, artists such as John Sloan, George Bellows, and Edward Hopper blazed a trail that led to some of the most iconic works of twentieth-century American art. Students will explore the relevance of these themes today and create artwork that reflects these ideas regionally and globally.

September 28 – Portraiture
Artist-in-residence Corey Pitkin will provide a look at how as oppressive realism faded from vogue in the late nineteenth century, several artists began to reinvent traditional portrait painting to reflect the changing tastes. Participants will create a painted portrait with inspiration from artists such as Robert Henri, Antonio Mancini, Anders Zorn, and John Singer Sargent.

October 26 – The Shadow of Rubens
Artist-in-residence Corey Pitkin will lead an exploration of Peter Paul Rubens and his influence on some of the best-known artists of the seventeenth century, either directly as the mentor of Anthony Van Dyke or as the aspiration of Rembrandt. Inspired by the Flemish and Dutch master’s painting techniques, participants will create a Rubens-inspired portrait.