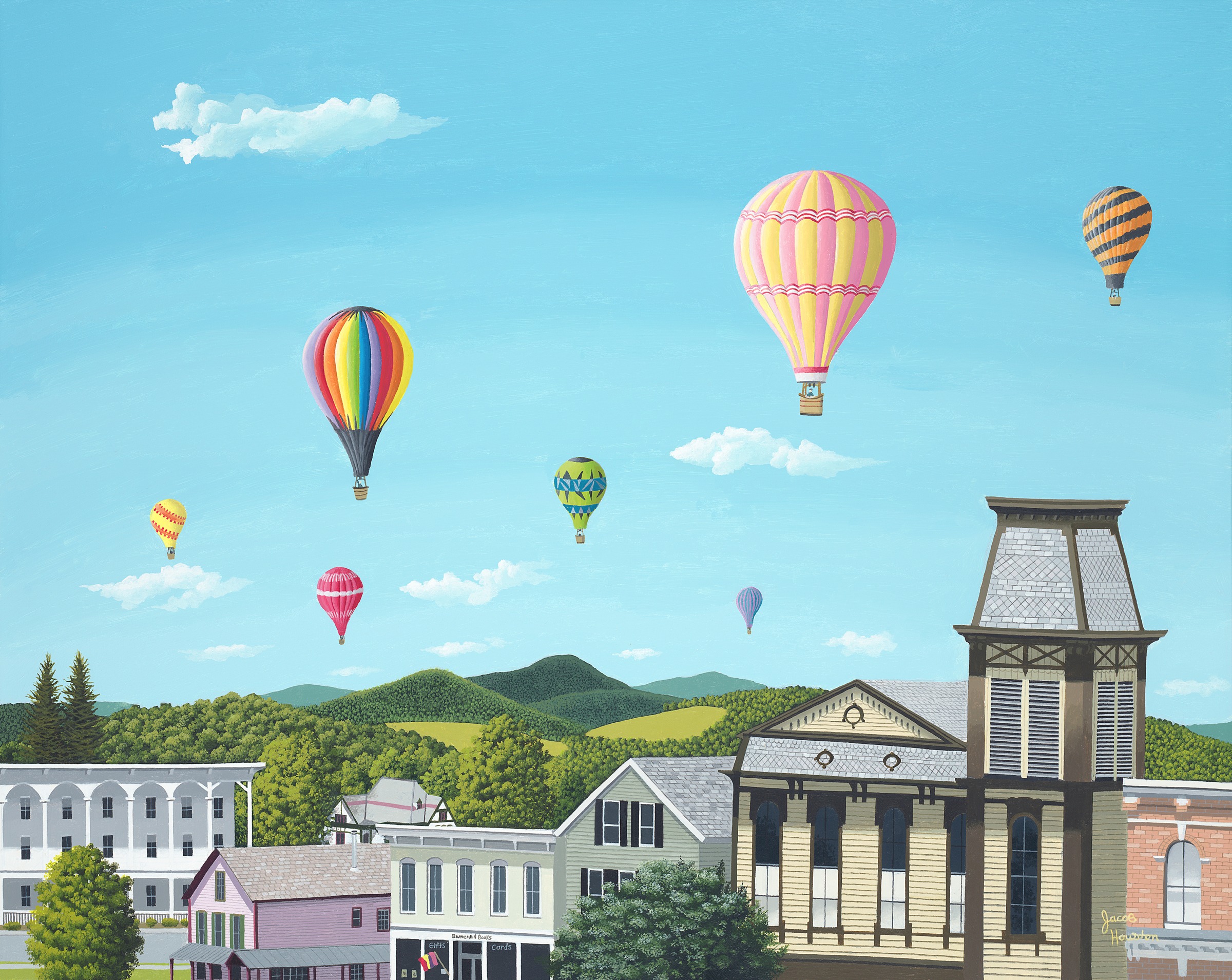 GLENS FALLS, New York — Nothing seemed extraordinary about the conversations Jacob Houston had with three separate bicyclists who visited his studio during a Washington County studio tour a few summers ago.

So when he received a letter a year later from a man who introduced himself as curator of The Hyde Collection — an avid bicyclist who had stopped and chatted with Houston and his parents on that lovely summer day — and asked if Houston might be interested in an exhibition at the Museum, the 26-year-old artist was in disbelief.

“It was almost unreal,” he said. “It didn’t make sense; I didn’t expect my stuff to be in The Hyde!”

But, beginning April 7, twenty-three of Houston’s paintings will be exhibited in the Museum’s Hoopes Gallery in A Magical World: The Art of Jacob Houston. The exhibition runs through June 23.

Jacob might be the only one surprised to see his acrylic works at the Museum. Since early elementary school, he has been awing the region with his bright, detailed art.

When he was 12 years old, he entered one of his paintings into the Washington County Fair Farm exhibition and won first prize — an honor he took home every year until he aged out of the competition.

“Jacob’s open-hearted, joyful view of the world captivated me immediately,”  said Jonathan Canning, director of curatorial affairs and programming at The Hyde Collection, remembering the 2017 studio tour. “I looked at his portrayal of New York City and I felt the wonder of my first trip there.”

Canning is just the latest to recognize Jacob’s talent. Houston won first prize at Lapham Gallery’s first LARAC 120 degrees Intercollegiate Art Competition, competing with artists from colleges throughout the region. His art has also been exhibited in a three-person show at LARAC and in a solo exhibition at Southern Vermont Arts Center. He was featured artist in the Malta League of Arts’ Arts Attitude exhibition. He has also twice been selected to be part of the National Society of Casein & Acrylic Painters’ exhibit at the Salmagundi Club in Manhattan.

Houston is mostly self-taught and paints the beauty he finds in the world around him, what he encounters in his travels, and places he can only dream about. “I paint something I find interesting,” he said. “I might want to travel there, or I have been there and like it a lot.”

Among his travels so far are New York City, France, Ireland, and Rome. Right now, his favorite work of art is Africa, although he has never been there. To create it, he looked up photographs on the Internet. “I take a bunch of images, then put my own take on it,” he said, from the Greenwich home where he lives with his parents, Jim, a civil engineer, and Claire, a retired fifth-grade teacher who now serves as her son’s manager.

“He treats it as a regular career,” Claire Houston said, describing how her son works Monday through Friday at the family’s dining room table.

She said Jacob’s love of art and talent for it were evident early on. His evolution as an artist is chronicled in a series of albums she created and proudly displays in the cozy den of their family home.

Page after page, a young Jacob smiles at the camera next to works of art that become more refined but maintain a bright, dreamlike characteristic throughout.