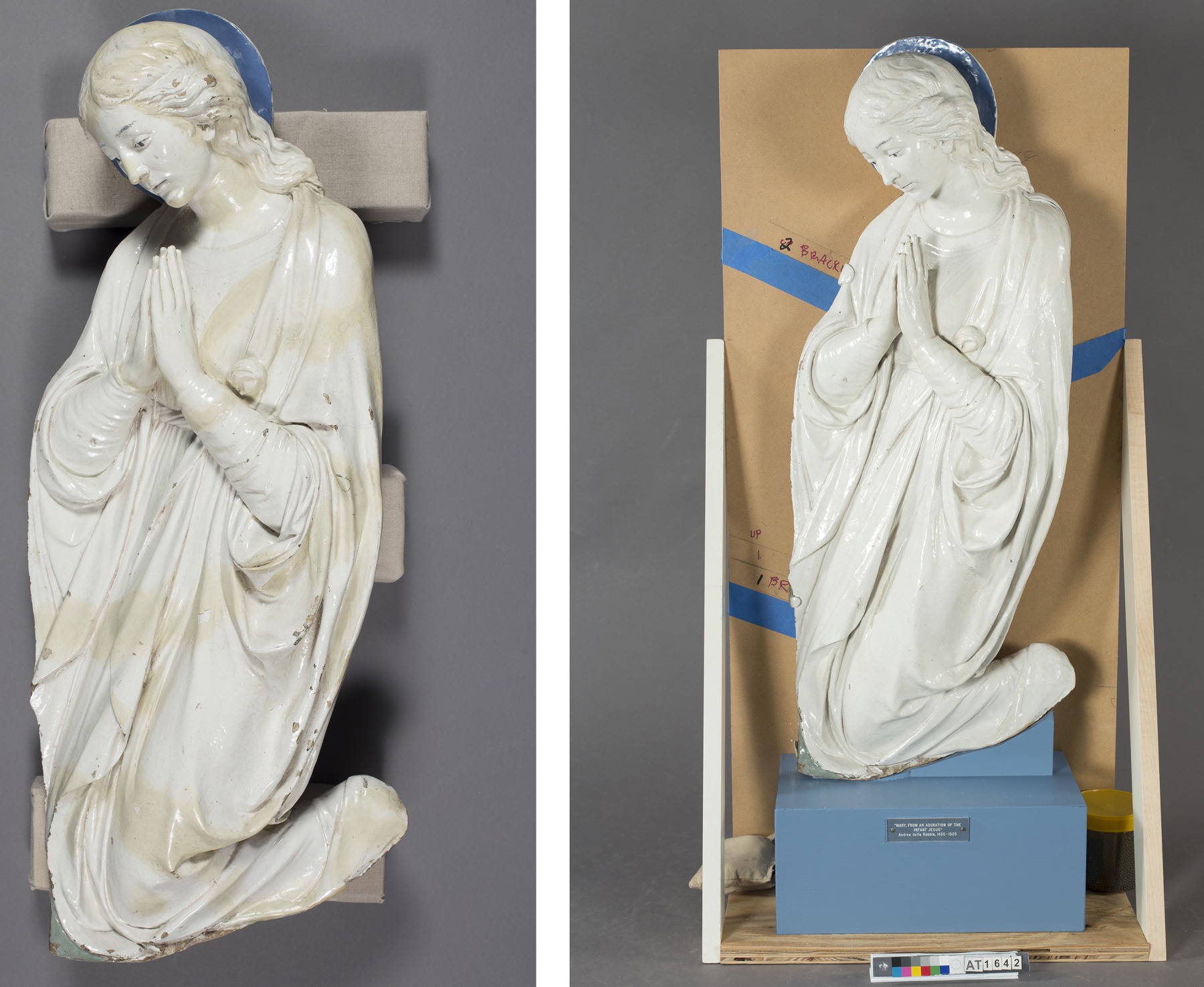 The exhibition presents for the first time since their conservation two works from the Museum’s collection: a terracotta sculpture, Madonna, ca. 1480, by Andrea della Robbia, and a landscape painting, A Peep Into Lake George (1873) by Hudson River School artist James Brade Sword. The projects were completed at Williamstown + Atlanta Art Conservation Center and funded by a grant from Greater Hudson Heritage Network, a partner of New York State Council on the Arts.

As one of just five museums in the United States with works from all three generations of the legendary Renaissance Florence ceramics shop of the della Robbia family, The Hyde Collection is proud of its commitment to preserving its treasured terracottas.

Museum founder Charlotte Hyde purchased Madonna from Brummer Gallery in New York in 1936, and had the statue installed at the foot of the stairs in Hyde House. The high-relief representation of the Virgin Mary was likely originally part of a large-scale, multi-piece depiction of Adoration of the Christ Child. Now missing is at least a figure of the Christ Child lying in a bed of straw. Larger such tableaux would also include an ox, an ass, and attendant angels. The history of Madonna and the relief, and how this figure became separated from the rest of the relief, is unknown.

Photographs from the 1930s of the figure installed in Hyde House show bands of discoloration. By 2018, they had become too disfiguring for Hyde Director of Curatorial Affairs and Programming Jonathan Canning.

“The della Robbia family’s century-long artistic and financial success in Renaissance Florence was due to the purity of their white glaze,” he said. “The pristine, unblemished surface of their Madonnas conveyed to the faithful a sense of her holiness. We no longer had any sense of that because previous restorations had changed color.”

Conservators examined damaged areas on the figure’s neck, hands, halo, nose, and cheek. It was believed the discolored bands were earlier patches, masking minor stress cracks that occurred during firing. Experts expected to be able to remove the yellowed overpaint and spackle and make repairs relatively easily. However, they discovered more extensive damage than anticipated, and forms of restoration they had never seen before.

Damage extended over 30 percent of the sculpture. To restore it, an earlier conservator had not filled losses with spackle, as a modern conservator would, but had molded and fired ceramic fills, in much the same way as Andrea della Robbia had made the original in the fifteenth century. By analyzing the composition of the glaze using X-ray florescence (XRF) spectroscopy, conservators were able to determine an approximate date of the restoration. They took samples from both original areas — the Virgin’s cheek and robe — and from fills in her hands and the tail of her robe, then bombarded them with radiation. The conservators were able to determine the composition of each sample, noting that each contained a high degree of lead and some tin, both common elements in traditional formulae for white glaze. Only the repairs contained zinc, which wasn’t identified as a distinct element until 1746, suggesting the sculpture was repaired several centuries after its creation.

“I had heard that there was a period when restorers repaired damaged della Robbias using the same techniques to mold and cast the terracotta as the family had used in its workshops,” said Williamstown + Atlanta Conservation Center objects conservator Helene Gillette-Woodard. “But I had never seen it in person. The old ways persisted for much longer than we think. The ceramicists really had to know their craft to mold a piece to the right size and shape so that once it had been fired — when it would invariably shrink — it could still neatly fit into place.”

Also included in Masterpieces Under the Microscope is one of the Museum’s two Baskets of Fruit. (A second is exhibited in the Music Room of Hyde House; Luca della Robbia’s Madonna of the Lilies is exhibited in the home’s stairwell.) The work was created under Giovanni, son of Andrea and great-nephew of Luca, under whose reign the family style adopted a broader range of colors, evident in the realistic depiction of ripening fruit and creatures it attracts. 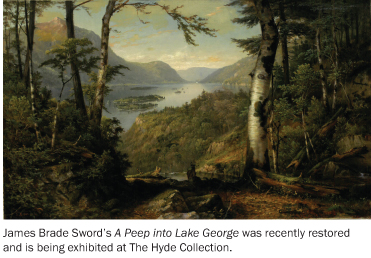 example of Hudson River School painting. The movement is considered to be the first distinctly American school of landscape painting.

Sword (1839–1915) was trained as an artist at the Pennsylvania Academy of the Fine Arts, under Christian Schussele (1824–1879), a figure and history painter. Sword became a respected figure in the American art world, being elected president of the Philadelphia Society of Artists in 1878 and director of the Art Club of Philadelphia in 1887.

He was a friend of Asher B. Durand (1796–1886), the leading artist of the Hudson River School, and traveled with him to this region several times. It is known Durand was on Lake George in 1871 and 1872; Sword’s painting is dated 1873. Artists frequently sketch in the field, then spend winter and spring in the studio, executing paintings.

“It’s great fun to consider that Sword’s first peep of the Narrows on Lake George may have occurred in the company of Durand,” Canning said.

This painting by Sword was donated to The Hyde last fall and sent to Williamstown for conservation. The painting had a yellowish tint, suggesting a varnish that had discolored. Meant to saturate the colors, the old varnish diminished the painting’s effect and hid details in the work, not the least of which was the white hull of a steamship passing through the Narrows. The cleaning, however, revealed changes made by Sword himself that, more than a century later, were very distracting. It appeared he glazed over a mountain peak, presumably to diminish its prominence. Similar changes were made to parts of the sky at the center of the painting. Over time, the artist’s updates discolored and, uncovered by the recent treatment, appeared jarring. So, a glaze containing dry pigment was applied to tone down the artist’s changes.

“You never know what you’re going to uncover when you start to conserve a work of art,” Canning said. “In one of these projects, we found evidence of the longevity of Renaissance ceramic techniques; in the other, we uncovered changes made by the artist himself, invisible at the time, but that over the centuries became increasingly obvious and distracting. But we learn so much about an artist’s technique from these sorts of discoveries. It keeps us on our toes.”

The exhibition runs through September 15.