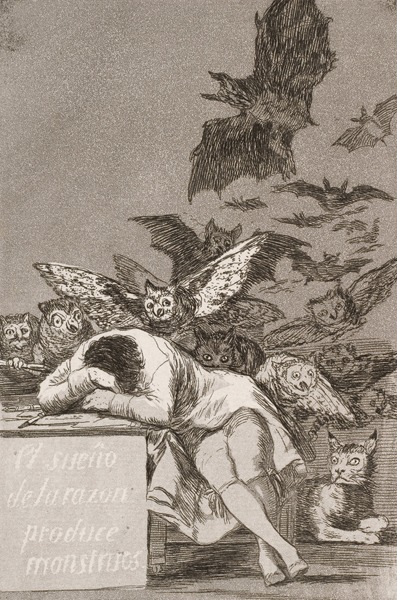 GLENS FALLS, New York—The Hyde Collection celebrates the works of two innovative printmakers from different eras with the opening of Francisco Goya: The Caprichos Etchings and Aquatints and Dox Thrash, Black Life, and the Carborundum Mezzotint on January 19.

Francisco Goya (1746–1828) was an artist very much at the cusp of two worlds: a medieval world of faith and feudalism, and a modern world of science and reason. He has come to be considered the last of the Old Masters and the first of the Modern artists.

Using the privilege provided him as portraitist of the monarchy and aristocracy, Goya created a series of etchings that lambasted Spanish life at the end of the eighteenth century. Eighty of those works comprise Francisco Goya: The Caprichos Etchings and Aquatints, which will be exhibited in Wood and Whitney-Renz galleries from January 19 to April 26.

The Age of Enlightenment that spread renewed hope on much of Europe hadn’t quite reached Spain, so Goya took aim at what he saw as backward thinking: a church that hunted heretics, peasant superstitions, and the upper class’s brutal treatment of the poor. The result is a body of work that skewers the hypocrisies, cruelties, and pretenses of Spanish society in a visual language readily discernible by all who saw it. Bats and cats represented nocturnal and infernal fears; owls were messengers of the gods; and donkeys suggested human frailties.

“Spanish society was still, in some ways, rather medieval,” said Jonathan Canning, The Hyde’s director of curatorial affairs and programming. “Goya bluntly expresses his growing disillusionment. The power of his satire inspired subsequent generations, particularly the French artist Honore Daumier (1808–1879). Goya’s searing visual critique of contemporary society is considered by many the beginning of modern art.”

Francisco Goya: The Caprichos Etchings and Aquatints was organized by Contemporary and Modern Print Exhibitions.

Francisco Goya is regarded by many as the most important Spanish artist of the late eighteenth and early nineteenth centuries. Throughout a long and prolific career, Goya’s art shifts from lighthearted to deeply pessimistic.

Goya studied under painter José Luzán Martínez (1710–1785), and grew into artistic maturity during the Age of Enlightenment. By the 1780s, he was frequently painting portraits of aristocrats. With symbolic imagery, he instilled in portraits a painterly quality that captured the true essence of his subject.

By age 40, Goya was appointed painter to Spanish King Charles III, and, in 1789, was promoted to court painter upon the succession of Charles IV.

After battling an illness that robbed him of his hearing, Goya became increasingly cynical of what he deemed societal injustices. It was at this time he created The Caprichos. In part protected by his social standing as painter of the monarch, Goya further deflected accountability for the ideas expressed in the etchings by creating The Sleep of Reason Produces Monsters. The artwork shows the fantastical creatures that invade the artist’s mind, particularly during his dreams.

When France invaded Spain in 1808, Goya pledged allegiance to Joseph Bonaparte, and painted members of the French regime. After the fall of Napoleon in 1814, Ferdinand VII became king, then launched a reign of terror, revoking the liberal Constitution and reinstating the Inquisition.

When Goya was questioned about his loyalty, he showed his allegiance by commemorating Spain’s uprising against the French in two paintings, The Second of May and The Third of May. Both seminal works — Goya’s oeuvre — are now part of Museo del Prado’s collection.

He spent the final years of his life in France, where he died in 1828.

Years before the Civil Rights Movement forced white Americans to see the disparities between white and black America, Dox Thrash (1893–1965) brought to the nation an inside look at black life in a country torn apart by segregation.

The Hyde will offer Dox Thrash, Black Life, and the Carborundum Mezzotint from January 19 through March 22 in Wood and Hoopes galleries. The exhibition examines the artist’s work portraying life in rural Georgia, urban Philadelphia, World War II, and chronicling the development of black artists and society as the walls of segregation began to crumble.

“It’s unlikely that our Hyde audience will know the name Dox Thrash. But he was part of a movement of social realism that included John Sloan and Rockwell Kent, whom we exhibited recently,” Canning said. “Thrash represented African American life as it was, using everyday subject matter.”

Thrash was born in Georgia, fought in World War I, then studied at the Art Institute of Chicago. He settled in Philadelphia, where among a burgeoning black middle class he was the first African American artist to work at the Work Projects Administration’s Fine Print Workshop, the only WPA community center focused exclusively on printmaking.

His exploration of printmaking led to development of the carborundum mezzotint, which allows for creating darker skin tones. In most printmaking, the artist starts with a light surface and creates dark layers. But Thrash did the opposite, starting with a black plate, abrading the surface, and rubbing it down to create lighter grays and whites.

Dox Thrash, Black Life, and the Carborundum Mezzotint was organized by Dolan/Maxwell.

Dox Thrash was raised on the outskirts of Griffin, Georgia, a small town midway between Atlanta and Macon. He quit school after the fourth grade, but indulged his love of drawing through correspondence courses.

Thrash arrived in Chicago in 1911, found work as an elevator operator, and enrolled part time in night classes at the Art Institute of Chicago in 1914. He left college to serve in the U.S. Army during World War I as part of the all-black unit proudly known as the Buffalo Soldiers. On November 11, 1918, the final day of the war, Thrash was wounded.

In 1919, he re-enrolled at the Art Institute. When he finished his education, he moved around the Northeast before settling in Philadelphia in 1926. He studied printmaking with Earl Horter at the Graphic Sketch Club (now the Fleisher Art Memorial).

At the height of the Depression in 1937, Thrash joined Philadelphia’s Fine Print Workshop, a division of the government-sponsored Federal Arts Project, the massive work relief program designed for the thousands of unemployed artists. It was there, with fellow WPA artists Hubert Mesibov and Michael Gallagher, he discovered that carborundum, an abrasive used to refurbish lithograph stones, could also roughen the surface of a copper plate. Like the more labor-intensive traditional mezzotint printmaking technique, the new carborundum mezzotint method was able to produce a range of rich velvety tones.

For the next two decades, Thrash was a familiar figure in Philadelphia art circles, participating in exhibitions and workshops at the Philadelphia Museum of Art, the Print Club of Philadelphia (now the Print Center), and the Pyramid Club. He died in April 1965 and is buried in the United States National Cemetery in Beverly, New Jersey.