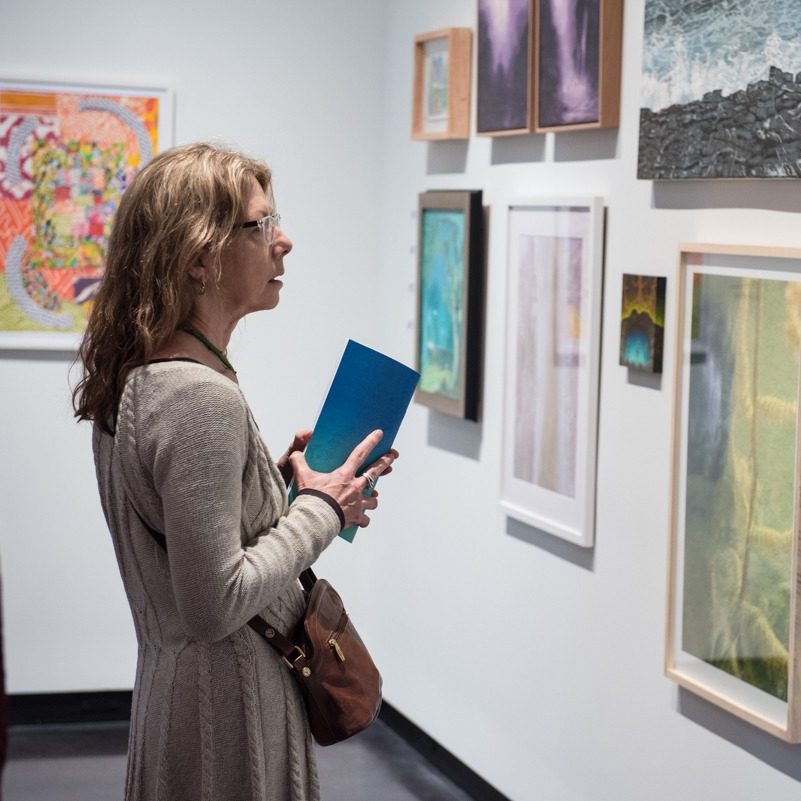 Cyndy Barbone has been weaving for most of her life, but after hearing a radio broadcast about the world’s water crisis, changed her method.

“It takes so much water to rinse out dye, and I thought, ‘This is crazy,’ because … it seemed to be a really urgent issue,” she said. “This is one way I could make a difference.”

Barbone is one of five artists with works in Artists of the Mohawk Hudson Region who will speak at 2 pm Sunday, November 10, at an Artists’ Panel Discussion at The Hyde Collection. She will be joined onstage by Yura Adams, Charles Geiger, Marilyn McCabe, and Jamie Rodriguez. The panel is moderated by Tony Hall, editor of Lake George Mirror.

“Contemporary art is adapting to an unprecedented challenge, that of making the unimaginable intelligible,” Hall said. “The panel will talk to us about that, as well as how they as individual artists are processing the science behind climate change.”

As guest juror Victoria Palermo reviewed more than 1,500 submissions for this year’s Artists of the Mohawk Hudson Region exhibition, she saw a theme clearly emerging. Through their works, artists were responding to climate change.

She curated a sprawling exhibition with artwork in three galleries and installations in Hyde House. The works in the Feibes & Schmitt and Rotunda galleries, and the Education Wing hallways are centered on the environment. (Works in Hoopes Gallery and historic Hyde House are not thematic.)

Some works — like Adams’s Seismic Shift and Equator Speed, which are based on the artist’s imaginary redesign of Earth — are clearly about the environment. “News about climate change is really starting to take over,” Adams said. “It’s something we’re dealing with on such a large level, this barrage of bad news became a trigger for my work.”

Other artworks are more subtle.

Barbone’s Our Generation Should Be Different, for instance, depicts four women in the artist’s life, each with their own story. Barbone’s commentary, on the surface, isn’t environmental. “Even though they’re common people, all the stories are lining up with a greater story of women’s issues in the world,” Barbone said.

However, around the same time she was inspired by the #MeToo movement, she decided to make her weaving more environmentally sound by eliminating the dyeing process.

The impact is striking. “The fact they’re almost ghostlike goes along with the idea of women still being invisible on some levels,” said Barbone, whose works are included in exhibitions around the world that examine how fiber artists are making the art form more sustainable.

The Artists’ Panel will discuss what inspired the artists and how the environment changes their practices.

“As an extension of the exhibition, this gathering will be an opportunity for artists to share, with audience members and each other, the impacts of climate change on their individual art practices and discuss the potential role that art may play in raising awareness,” Palermo said.

The Artists’ Panel Discussion is open to the public. Admission is free.

“It is meant to be a discussion of interest not only to artists but to everyone interested in the issues surrounding climate change,” Hall said.

Founded in 1936, the Artists of the Mohawk Hudson Region is among the longest-running regional exhibitions in the country. The exhibition is hosted alternately by The Hyde, University Art Museum, and Albany Institute of History & Art. AMHR provides a benchmark for contemporary art in the Upper Hudson Valley and Adirondack regions.

Artists of the Mohawk Hudson Region runs through December 4 at The Hyde Collection.

About the juror
Victoria Palermo is a prominent regional artist, educator, and resident. Working in both two and three dimensions, Palermo explores light and color in works exhibited in such varied spaces as bus stations, airports, and the grounds of museums. With exhibitions across the nation, long-term teaching appointments at Skidmore College and SUNY Adirondack, and additional assignments at Williams College and the University of Iowa, she has been featured in Sculpture and The New York Times, and has received awards from the New York Foundation for the Arts and the New York State Council of the Arts. She was a 2019 Artist Panelist for the NYFA (New York Foundation for the Arts) Fellowship Awards for Architecture/ Environmental Structures and Design.