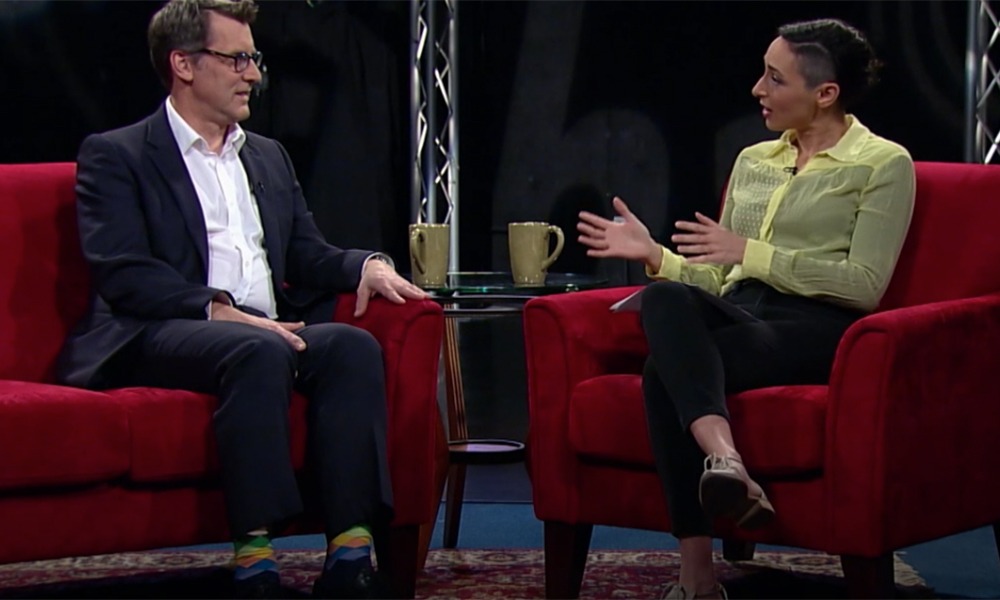 Did you catch The Hyde Collection’s big TV debut? On February 18, WMHT aired its popular AHA! A House for Arts series, featuring profiles of The Hyde’s Director of Curatorial Affairs and Programming, Jonathan Canning; and Curator of Museum Education & Programming (and talented contemporary artist), Jenny Hutchinson.

Show host Lara Ayad first talked with Hutchinson about her medium. Hutchinson has a private art studio at her home in Glens Falls, describing her artwork as “mainly mixed media.” She went on to say that “my skill set’s in oil painting, but I’ve always been drawn to drawing mediums as well: color pencil, graphite [and] ink work. I like to work with whatever I feel like I need to use at the moment.” Hutchinson, who has a Master of Fine Arts from Clemson University and BFA from Plattsburgh State University, worked as a Gallery Curator and Marketing Coordinator at LARAC and taught Basic Design and Introductory Drawing as a adjunct instructor at SUNY Adirondack, before landing at The Hyde. Of the chance to work at the Glens Falls art museum, Hutchinson told Ayad, with a chuckle: “What artist doesn’t want to work at The Hyde Collection? I’m not an artist full time, but I’m part of a creative atmosphere that informs my artwork.” (Check out the full interview below.)

Next up on the show was The Hyde’s Canning, with Ayad delving into the question of what exactly an art museum curator does. Says Canning of his role at The Hyde: “As director of curatorial affairs, I’m responsible for the care of The Hyde’s own collection in the historic house, and that is a collection of European and American art that spans from the late Middle Ages right up to the present day.” Canning explained that he’s responsible for bringing in new art exhibitions—normally, four major ones and six smaller ones, annually—choosing the pieces that will be included in them. One major misconception about his role? “That curators are decorators…there is more to it than just that,” said Canning. Something that might go unnoticed by the average museum-goer is the fact that each piece that’s chosen for an exhibition has a thematic association with its neighbors.

Canning, who grew up in Canterbury, England, said he was inspired by how art and architecture were used, historically, and that’s what got him interested in a career in art history. Canning has a Master’s degree in Philosophy from Columbia University, New York; a Master’s in Art History from the University of Delaware; and a Bachelor of Arts (with honors) from the Courtauld Institute at the University of London. Prior to accepting the position at The Hyde, Canning was Senior Curator at the Loyola University Museum of Art (LUMA) and the Curator of the Martin D’Arcy, S.J. Collection in Chicago, IL.