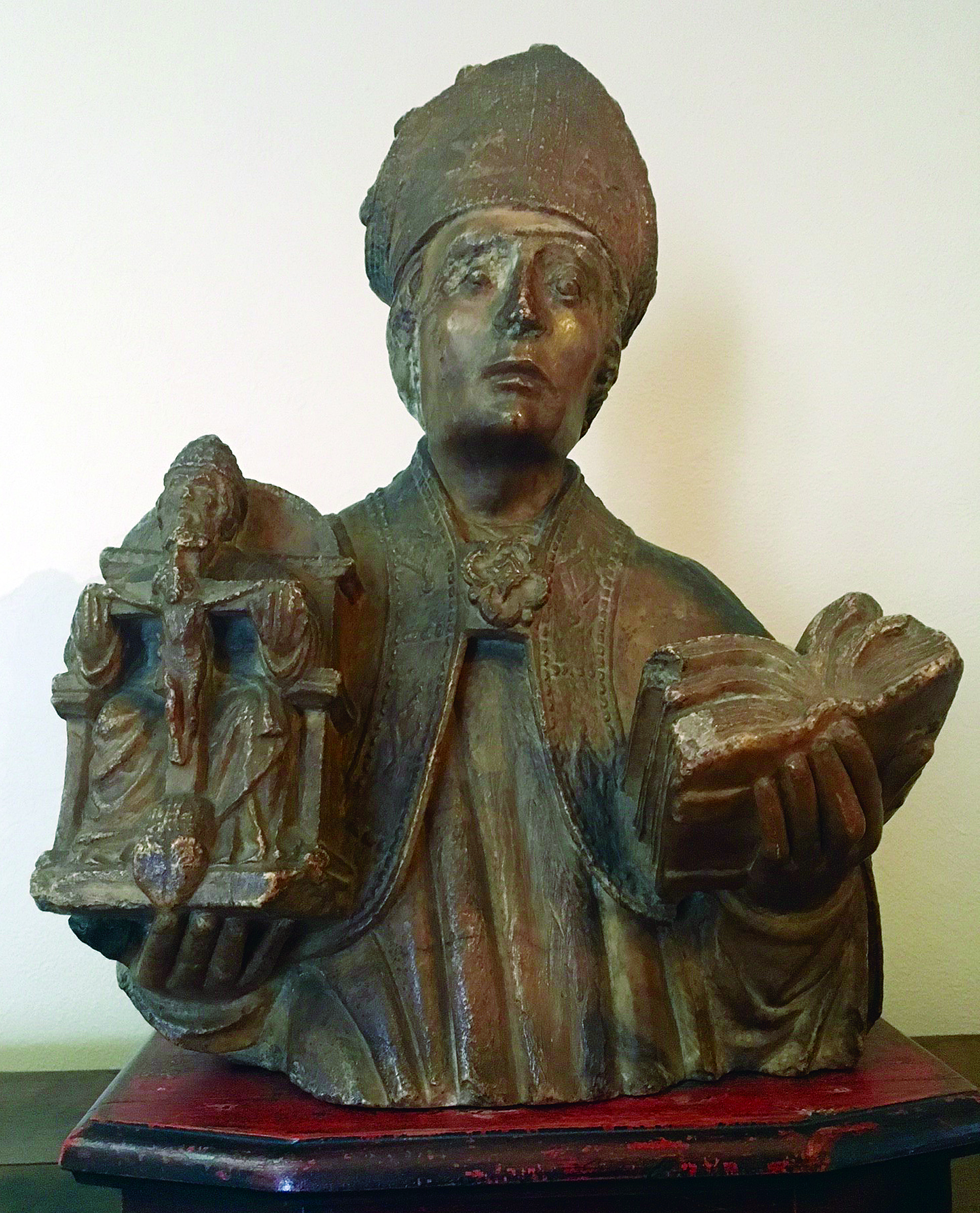 A recent Ask the Curator question left at the front desk wanted more information about the sixteenth-century alabaster bust of St. Augustine in the Music Room.

Jonathan Canning, The Hyde’s director of curatorial affairs and programming, wrote the following:

The bust is carved from alabaster. A soft translucent stone, it can be carved with woodworking tools and allows for considerably fine detailing.  Full advantage of that quality is exploited here in the execution of the bishop’s ornate ecclesiastical garb, the bejeweled miter upon his head, and the hem of the cope he wears. In his left hand, the bishop holds an open book with wooden covers decorated with metal bosses. Libraries abound with medieval books bound in this manner. In his right, he holds a representation of the Trinity. An enthroned God the Father, wearing a triple tiara, holds before him a crucifix upon which is nailed God the Son, and between the two hovers a dove, signifying God the Holy Spirit. A heart is carved at the base of the cross. The symbolism of a bishop with a book and the Trinity identifies this figure as St. Augustine, one of the leading scholars and theologians on the Latin Church. He wrote many important treatises, including one on the Trinity and another one the heart’s desire to know God.

This was one of the earliest pieces acquired by the Hydes. They bought it in New York in 1919. At the time, it was thought to be English because England produced a considerable number of alabaster statues in the later Middle Ages. Many were used on funerary monuments and altarpieces across Europe, from Portugal to Hungary. In this instance, I think it was executed either as part of a larger altarpiece or as a single devotional figure for personal prayer. The saint was highly venerated within the Church, but not one of its most popular saints, so I would guess that this was made for a member of the Church rather than a layman, very likely for a member of the Augustinian Order.

Stylistically, this looks like no other English alabaster, and may, in fact, have been carved in Germany. Even among German alabasters, there are some anomalies which have made pinpointing the place and date of execution very difficult for scholars.