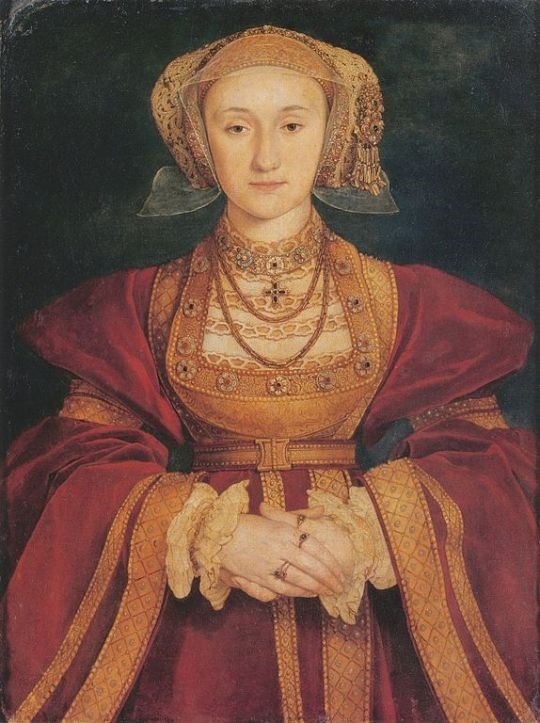 Before there was Tinder and the internet, there were artists and diplomats conveying images between potential suitors. There is nothing new in exchanging beguiling pictures.

It is possible that this portrait of a young woman by Barthel Bruyn the Elder (1493-1555) is just such a flirtatious, catch-me-while-I’m-free sort of picture. What tells me that? Firstly, she is not wearing a wedding ring. Secondly, her hair is in braids that escape her headdress. Well-to-do married women in sixteenth-century Germany covered their hair completely, only girls wore their hair loose, while virtuous, eligible maids wore their hair braided. That she comes from a prosperous family is evident from her clothing. The blouse beneath her velvet dress is embroidered with gold thread. Small pearls adorn a band in her headdress. The large sleeves are impractical. This young woman does not have to work.

She is in the market for a husband. It is possible that she has caught her man. The Metropolitan Museum possesses a portrait of a young woman by the same artist, presented in similar manner. She wears a dress and blouse of the same style; she holds a flower (a red carnation) in her right hand; her right index finger is adorned with a ring, but her left hand is bare. She, too, turns slightly to her right, but in this instance she turns towards her fiancé, who occupies a matching panel. Met curators believe the pair of portraits was commissioned to mark their engagement. We cannot know if there was a pendant, a boyfriend, to match The Hyde’s painting. 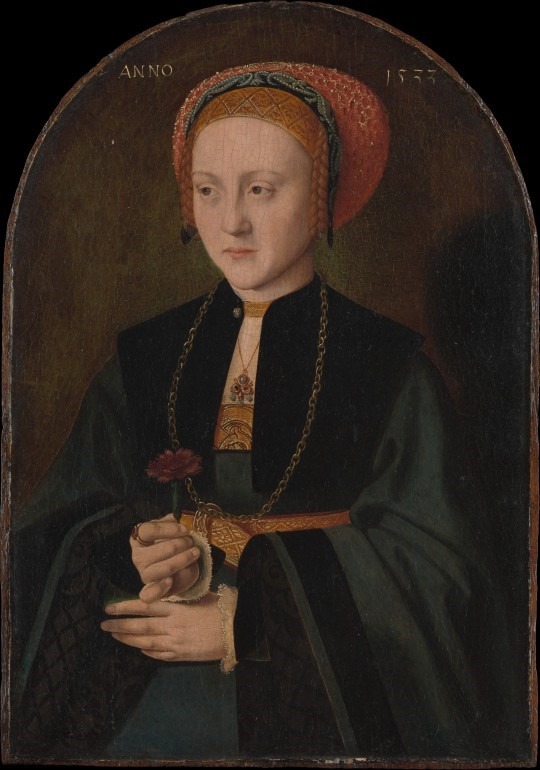 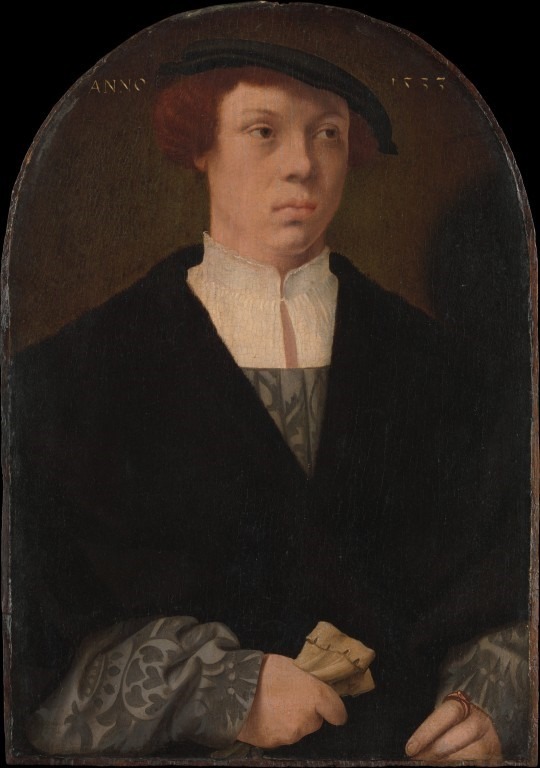 Barthel de Bruyn was the society portraitist in Cologne, Germany. Then as now, the city was a great industrial and trading center. Politically, it was under the suzerainty of the Archbishop of Cologne, one of the electors of the Holy Roman Emperor. Its mercantile class was extremely wealthy and well-connected across Europe. The Hyde’s young lady is likely to have come from that class. Her family had her on the market for a successful and advantageous marriage.

Barthel de Bruyn played a little known part in the most famous story of Tinder-style matchmaking in the sixteenth century: Henry VIII’s misalliance with Anne of Cleves. After the death of his third queen, Jane Seymour, Henry was on the hunt for a new bride. Jane had provided him with his longed-for male heir, the future Edward VI, but it would be nice to have a male spare. The three choices on the international marriage market for a king considered a heretic in Catholic Europe were the sixteen-year old, Danish-born and recently widowed Christina, Duchess of Milan, or one of the daughters of the Duke of Cleves: Anne (twenty-four years old) or Amelia (twenty-two).

Henry sought diplomatic reports and portraits on all of them. Christina had no wish to marry Henry. The Cleves sisters were not so independent-of-mind. One would make the political alliance their brother negotiated. Henry’s ambassador, Christopher Mont, traveled to Düsseldorf, Germany to meet them. He reported back that “Everyman praiseth the beauty of the said Lady [Anne], as well for the face, as for the whole body, above all other ladies excellent.” The clincher may have been the comment, “She excelleth as far as the Duchess [of Milan], as the golden sun excelleth the silvern moon.” He returned to London with recent portraits of the two sisters by none other than Barthel de Bruyn. That of Amelia no longer survives, and that of Anne may be the panel painting preserved at St. John’s College, Oxford. A portrait of Anne by an artist in Barthel’s circle is kept at Trinity College, Cambridge.

Mont was unable to confirm the accuracy of Barthel’s portrait so Henry sent Hans Holbein the Younger to paint Anne himself. The portrait that caused all the trouble is now at the Louvre. With a few artistic tricks, Holbein airbrushed Anne’s flaws. By painting her face on, he reduced the prominence of her rather large nose, and he smoothed away the pockmarks caused by small pox that marred her face. Henry had fallen in love with the idea of Anne of Cleves. She was the right age for him, a man in his late forties. She was gentle and would obey. Holbein’s portrait showed she had a fine figure and regal bearing.

But Henry fell out of love with her the minute he saw her. It was probably as much her lack of sophistication as her looks. Just after she landed in England, Henry appeared in disguise and unannounced. He wooed her in the manner of a courtly romance of old. Anne, embarrassed, perhaps not even understanding what he was saying, simply ignored him. The wedding went ahead for diplomatic reasons, but Henry quickly sued for divorce on the grounds that an engagement had been contracted years before between Anne and a French prince. It was a legal nonsense but a compliant English Church got Henry off the hook. Anyway, Anne and Henry became friends. She outlived him and his last two wives.

What’s interesting is to compare The Hyde painting with the others by Barthel. He had a formula. His figures stand in a shallow space against an undefined background with slight modeling of light and shadow. The woman turns to her right. And he takes particular care to portray the details of her costume.

The Hyde’s young maid maybe a woman on the hunt for a husband, or perhaps a fiancée looking forward to her wedding day. Whichever, modern-day snappers should beware. If the tale of a young woman from the sixteenth century is anything to go by, pre-marriage selfies may get you into trouble!