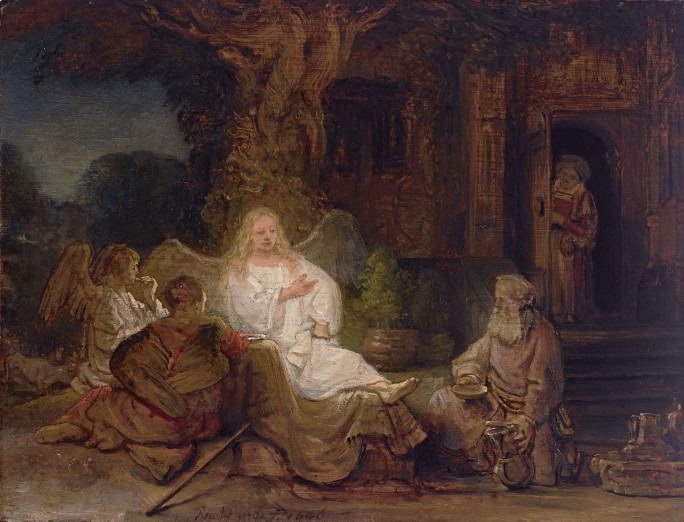 I’ve discovered a new form of engrossing pandemic-era online viewing. This week is my favorite week for January sales. Late in the month, various auction houses and dealers in New York host Masters Week. This year, despite a global pandemic, Sotheby’s outdid itself and watching the first of the sales today was, at times, edge-of-the-seat thrilling.

In a normal year, like the start of last year, I like to go down to New York on the weekend before the sales and preview the lots. The galleries at Sotheby’s and Christie’s are hung just like a museum. The walls are sometimes painted to enhance the paintings and the lighting presents them at their best. The only difference is that the labels include auction price estimates. It’s a form of glorious window shopping for me. I dream of what I could buy for the collection, if…. It is also an educational experience for me. For this is the week when scholars and curators of European paintings, sculptures, and drawings come to town from across the country, if not the world. You never know whom you might bump into in the salerooms. Often you can overhear or join, if you dare, an interesting discussion about the attribution, quality, or associations of a work up for sale. One thing to bear in mind is that not everyone agrees with the attributions of the auction house experts. Last year, I tagged along with my former professor, David Stone, as he dissected the Old Master drawings on offer at Christie’s. He introduced me to a curator from The Morgan with whom I discussed some Hyde drawings. All useful networking. 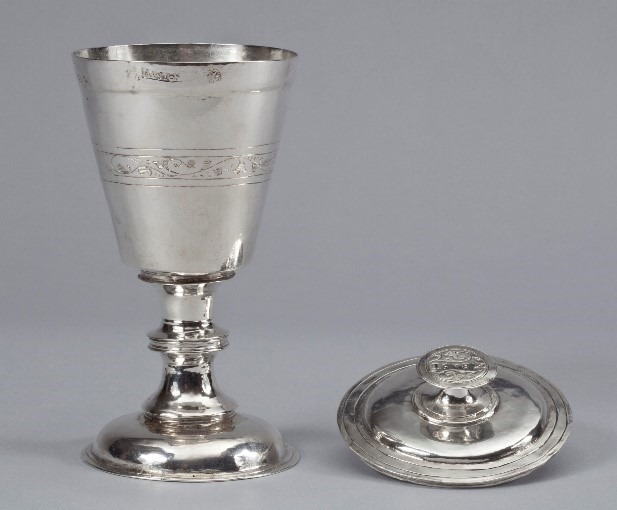 I tend not to attend the actual sales, which happen during the week. I have never myself bid at auction. When at the Loyola University Museum of Art, I really wanted to acquire a Protestant communion cup to contrast with the museum’s Catholic chalices, I had to commission an agent to bid for me. The auctions were in England and it took us two attempts to secure one. My agent, Wynyard Wilkinson, had to drive to opposite ends of the country to see the pieces and then bid for them. We were ultimately successful at a sale held by a small regional auctioneer, whom many collectors simply overlooked.

Today, there were a number of works I was interested to follow. The first six pieces were sold by the Albright-Knox Art Gallery in Buffalo. The museum has decided to refocus itself towards Modern and Contemporary art. Over the last few years, they have steadily sold off works that fall outside those parameters. Deaccessioning collection pieces is permitted under rather strict guidelines. The rules have been eased a little during the pandemic because of how badly lockdowns have effected museums’ incomes but, in general, a museum should only deaccession works that fall outside their mission or, are duplicates not of exhibition quality, or irreparably damaged. The funds generated should only be used to acquire more art. 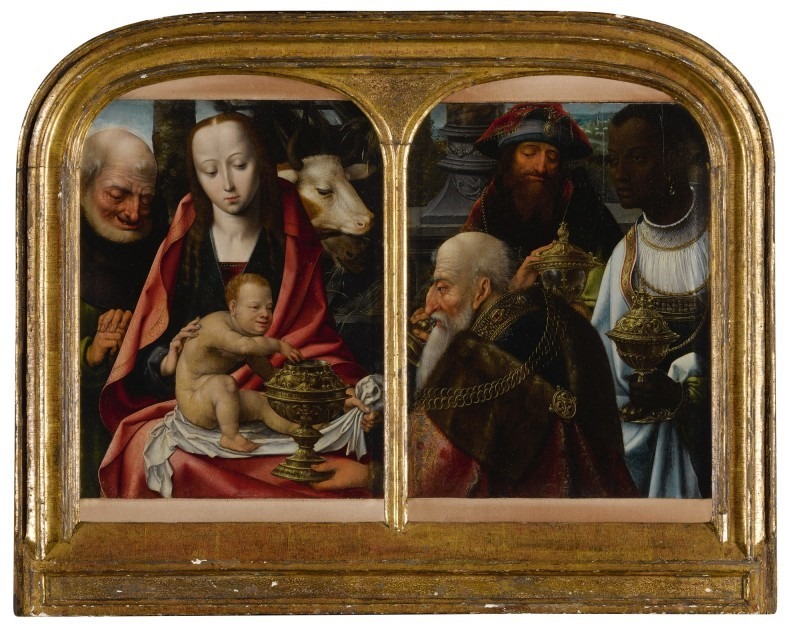 Had I been able to go down to the city and stroll the galleries, I may have seen or heard from others why two of Buffalo’s pieces didn’t reach their reserve prices. Were the reserves too high? Did collectors and curators not think either their quality or their attributions were quite right? Perhaps, they just weren’t to anyone’s taste. Selling at auction can be a gamble. You need at least two people, who really want a piece, to bid it up. The museum could wait to see if tastes and the market change, or it might negotiate a private sale after the auction.

At a normal sale, the auctioneer stands at a podium at the front of the saleroom. Major pieces hang on the walls and each piece is brought to the front, in turn, as the bidding takes place. For today’s sale, however, the auctioneer was in a room in New York on his own, watching screens linked to salerooms in New York, London, and Asia. In those rooms, in place of rows of bidders, there were tiers of Sotheby’s staff, standing physically distanced, holding telephone receivers to their ears. They spoke to invisible bidders, and, when instructed, called out a price, raised an arm, or simply shouted “Bidding.”

“What’s so gripping about that?” you ask.

I have learnt to sit towards the back in saleroom to take in the scene. Admittedly, I see only the back of bidders, but, unlike in the movies, you really do have to make a pretty obvious gesture to catch the attention of the auctioneer. You’re not going to accidentally buy a Picasso by absent-mindedly tugging at your ear or scratching an itch. Salerooms are busy, and surprisingly noisy, places. People come and go freely; quite a few chat away about all sorts of things unrelated to the sale. The auctioneer is a combination of master of ceremonies and instigator and coaxer. Unlike a conductor, he has no score. He doesn’t know, for sure, how the sale will go, or from which direction the bids will come. He has to monitor the bidders in front of him, the bank of staff manning telephones to the side, and a screen, suspended from the ceiling, indicating online bids. And what has always captivated me about an auctioneer at work is that whereas a conductor keeps time, the auctioneer makes time. Time in a saleroom is surprisingly fluid and flexible and that was masterfully on display today with this online sale.

Today’s auction was sponsored by Bulgari. Sotheby’s staff in New York wore Bulgari jewelry. In the midst of bidding, the auctioneer drew attention to the glint of a jeweled bracelet on one staffer’s wrist, to glistening earrings, a stunning brooch, or an eye-catching neckless on another’s. He introduced the models to us by name and title. The staff making bids were called out too. Alex in London, by the by, was a year ahead of me at undergraduate. A fun fact I learnt, of no earthly relevance to the lots, is that there are two English Georges in the New York office. Thus the auctioneer made time, created moments in the seeming onward rush of bids for Sotheby’s staff to coax the bidder at the end of the telephone line to keep in the race. In this extra moment there’s still a chance, for that lucky final bid that will clinch it.

Adding to the drama, at least on my computer screen, was a clever engineer’s manipulation of windows. Salerooms came to the fore and were relegated in time with the bidding. New York outbids London. Here’s Asia jumps in. Two sale rooms are stacked, one over the other, as bids are batted back and forth. At times, it got as thrilling as Wimbledon or the New York Open. Tennis for a Tiepolo. 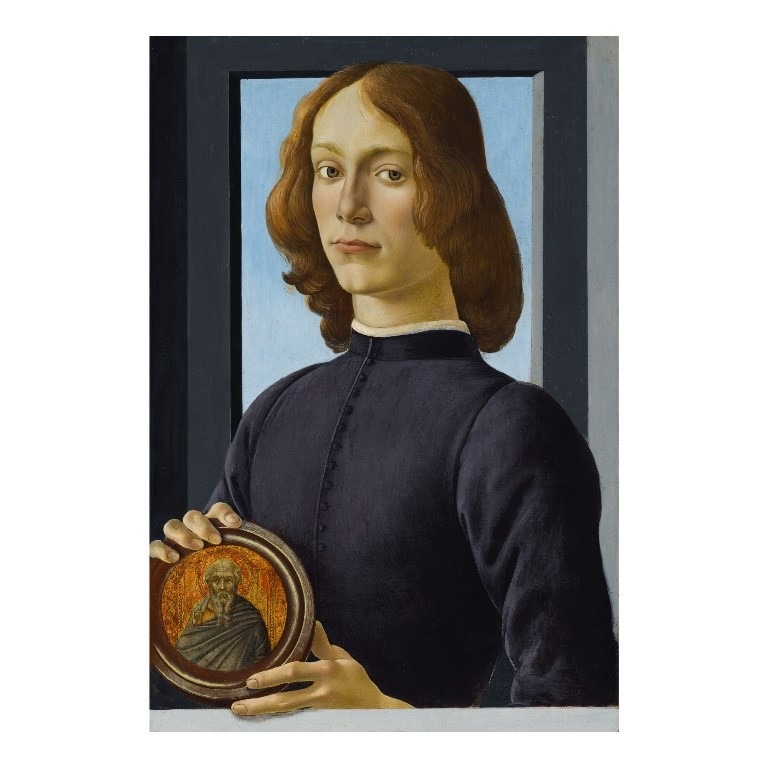 The sale of Sandro Botticelli’s Portrait of a Young Man Holding a Roundel, was breathtaking in the sums bandied about, but actually quite sedate in execution. Bidding started at $70M and increased at increments of $2M, topping out at $80M ($92.184,000 with commission). Even though it is extremely rare for such an archetypal example of early Renaissance portraiture to come on the market these days, there obviously aren’t too many collectors or institutions with the wherewithall to bid for one.

One mystery I can’t explain is the unexpected withdrawal from the sale of its star lot, no 9, Abraham and the Angels by Rembrandt van Rijn, Sotheby’s had hyped it with a promotional tour around its international salerooms and online (https://www.sothebys.com/rembrandt). But oh-so discreetly, referring only to its lot number, the auctioneer announced at the start of the sale that number 9 had been withdrawn. More to come on that, I hope and expect. So, keep reading your Hyde blog!