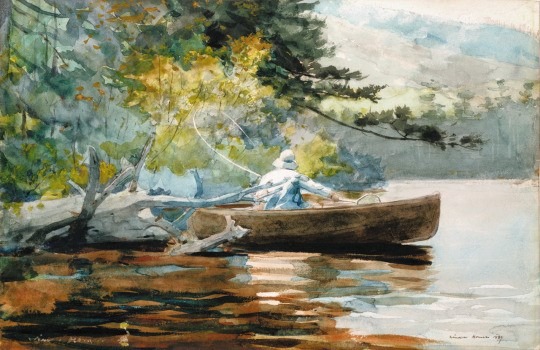 Recently, I heard a segment on NCPR about the Trout Lake artist Jeff Davis, who is in Florida during the pandemic lockdown. More accustomed to working in oils, he has taken up watercolors once again, a much trickier medium to manipulate and control. My mind immediately went to a pair of watercolors in The Hyde’s collection by an artist who also worked in both the Adirondacks and Florida: Winslow Homer (1836-1910).

One of the country’s greatest artists, Homer worked in a variety of media. On leaving school, he apprenticed for a commercial printer in Boston, making images for sheet music and commercials. During the Civil War, he became famous for his wood engravings published in Harper’s Weekly that illustrated accounts of the conflict. We have seen in a number of recent exhibitions at The Hyde that commercial and illustrative work was the prelude to careers for several American artists including John Sloan (1871-1951) and Dox Thrash (1893-1965).

Homer first visited the Adirondacks in 1870. He may have come in response to the run-away best selling travel book Adventures in the Wilderness; or, Camp-Life in the Adirondacks (1869) by William H. H. Murray. Residents of East Coast cities responded to the book’s call to the wild in droves. But there had also been a tradition among American artists, at least half a century old, of traveling through the region, capturing its natural beauty, and lauding its unspoilt wilderness as a national attribute. My predecessor as Hyde curator, Erin Coe, addressed the topic in her 2005 Hyde exhibition and its accompanying catalogue, Painting Lake George, 1774-1900. 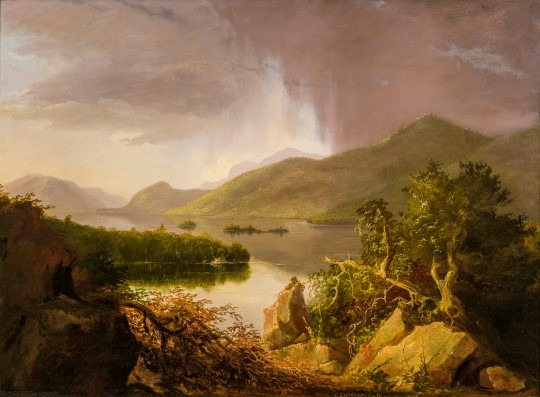 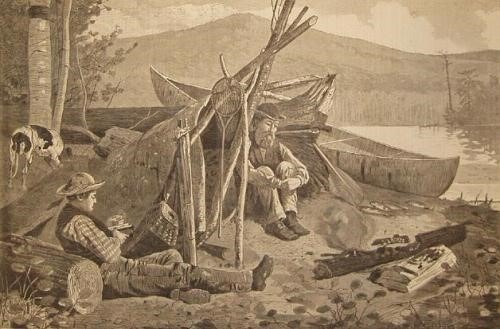 Homer was a great outdoors man. He loved the comradery of camping trips. They are the subject of many of his prints and paintings, including Camping Out in the Adirondack Mountains (1874). Homer was also enamored of the lore around the year-round residents who acted as guides for city dwellers over the summer. Adirondack artist and author William James Stillman (1828-1901) described the guides as “rude men of the woods, rough and illiterate, but with all their physical faculties at a maximum acuteness, senses on the alert and keen as no townsman could comprehend.” They became heroic figures in the many books published about the region. Their principal characteristics were that they were extremely strong, dexterous with an axe, and able to build a lean-to within a few hours, or a hut in days. They were skilled at hunting, fishing, and tracking bear, cooking on an open fire, and story-telling around the campfire at night. Homer included Adirondack guides in many of his images of the region, including The Hyde’s little oil sketch of a commanding, statuesque figure executed during that first 1870 trip. 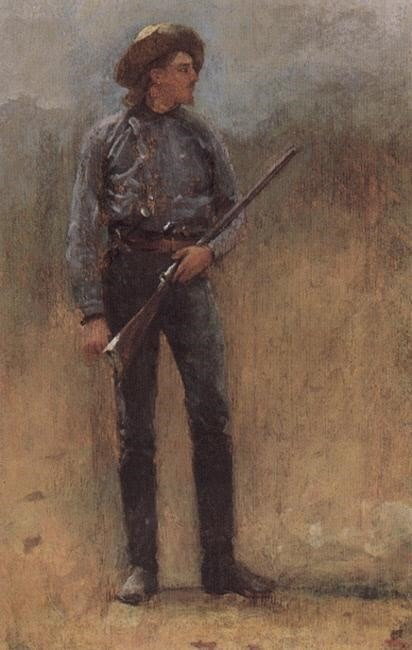 On that occasion, Homer traveled in the company of fellow artist and keen angler Eliphalet Terry (1826-1896). They both produced fishing images on that trip. Angling was a major sport at the time and fishing images were popular. It was a passion that Homer shared with his brother Charles, and one that features in many of Homer’s paintings from the period, such as Crossing the Pasture (1872), in which two boys (Charles and the younger Winslow?) strike out across a field to go fishing. 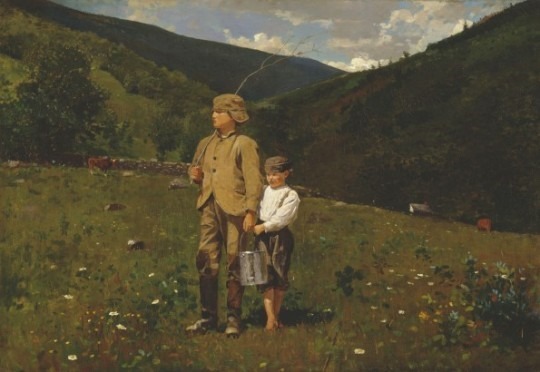 The adult brothers became members of the North Woods Club, famous for its fishing, near Minerva in the Keene Valley in 1888. Between 1889 and 1902, Homer produced a series of angling watercolors that brought him popular and critical acclaim. The Hyde possesses two of these.

The first is A Good One, Adirondacks, painted in 1889. That year, he stayed at the club twice: for nine weeks in late spring and early summer; and for seven in the fall. The Hyde’s watercolor was presumably painted in the autumn, as there is a hint of golden foliage in a tree along the water’s edge while others are still in full deep-green leafage. We see a fisherman in a boat; a fish caught upon his line that is bend back on itself in a dramatic curve; and his free hand outstretched holding a net, ready to scoop up his prize. In early 1890, Homer sent thirty-three of these watercolors to his dealer, Gustave Reichard, in New York. He wrote the latter suggesting that he advertise the exhibition specifically to anglers. Homer recognized the appeal the images would have for aficionados of the sport, and he was right. A New York Times reviewer wrote, “It is his trout-fishing pieces…that are richest in color and done with the greatest pleasure.” Thirty works were sold, each for $125.

At the very time he was enjoying such commercial success in New York, Homer was on another angling expedition. This time, to Florida. The Hyde’s second watercolor dates to this trip. Winslow had first traveled to Florida four years earlier, encouraged by his uncle, Arthur Benson, who was himself an avid angler. The state was popular among fly fisherman for its inland waterways and abundance of sea trout, channel bass, mangrove snapper, and large mouth black bass. Homer stayed near Enterprise on the St. John’s River. The tropical setting, the Spanish moss hanging from the trees, and the light and color reflected in the water evidently captivated the artist as much as the sport itself. 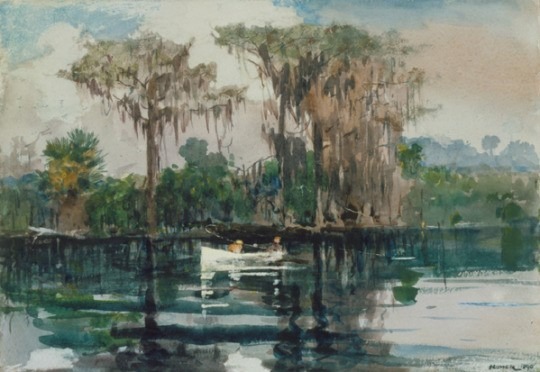 There was a third place to which Homer traveled to fish: Quebec. He and his brother Charles owned a camp there. In many ways, Quebec provided the true call of the wild against which the Homer brothers could pitch their skills and manliness. The Adirondacks, for all the bravado of the guidebooks, was a wilderness tamed. It was a landscape largely denuded of its first growth forests; its mountains ravaged by ore mining and smelting; and its rivers depleted of native fish. Indeed, the North Woods Club had to stock the local rivers. Over the course of six weeks in the summer of 1891, Homer caught a total of six fish. It was in the untamed wilderness of Quebec that Homer could truly experience the thrill of landing a mature and wily native fish. He captured that excitement in his Canadian watercolors and conveyed it through the vigorous handling of the medium. Many depict men in canoes navigating turbulent waters. In these works, Nature is the more powerful and primal force, always on the verge of overturning anglers in their boats. 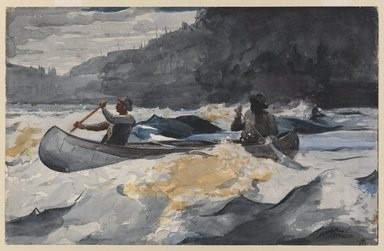 In that The Hyde owns watercolors executed by Homer in two of the three locations at which he produced powerful images of a sport he loved—images invested with not only his love of that sport and with Nature herself, but also with an authenticity that appealed to contemporary collectors—you will not be surprised to learn that acquiring a Quebec watercolor is high on my wish list for future acquisitions. Please remember this post at Christmas!