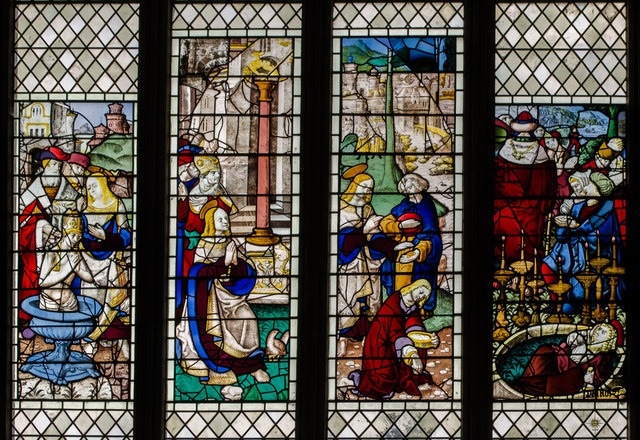 For Christians, Sunday was Palm Sunday, the day they celebrate, and some even reenact, Christ’s entry into Jerusalem, when his supporters climbed the tress and strew his path with palm fronds. In the Middle Ages, when every church was perceived as a manifestation of the Heavenly Jerusalem, the church became a representation of the early city. Galleries were built over the west door for the choir to occupy as the clergy and laity processed in as Christ had once ridden into the holy city. At Wells Cathedral, a hidden gallery was constructed within the stone façade to accommodate the choir. The boys’ voices emerged through holes in the wall behind sculptures of angels. 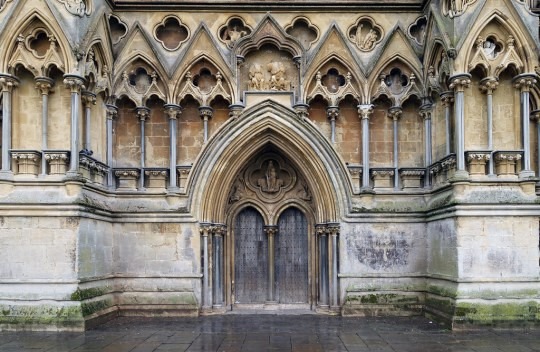 This week, Holy Week, is the most important in the Christian calendar. On Maundy Thursday, the faithful will commemorate Christ’s last supper with his disciple, when He washed their feet, mourn His crucifixion on Good Friday, and celebrate His resurrection on Easter Sunday.

At the end of the Maundy Thursday service, priests in Catholic and Episcopalian churches will follow the centuries-old tradition of stripping the altars of their rich liturgical paraphernalia. They will carry away candlesticks, chalices, and crosses, and fold up richly embroidered altar cloths. Statues will be removed or covered. The church will be left bare. The sacrament will be removed from the high altar and placed in a temporary Easter Sepulcher, representing the removal of Christ’s body to Joseph of Arimathea’s tomb. I always find it striking to watch this ceremony. The congregation leaves the darkened, denuded church in silence.

It is a wonder, given the stricture against “graven idols” in the Ten Commandments, that Christian churches should have so much religious art and, indeed, such a rich cultural history of fine art, architecture, music, and the decorative arts. Once the Early Church started to accept Gentiles, particularly anyone who had grown up with the Greek and Roman pantheon of gods and statuary, it was something of a losing proposition to forbid all imagery. The fight was lost with the conversion of the Emperor Constantine in 315. He gave the Roman church silver statues of Christ and the apostles. Such cultural largesse was a standard form of imperial patronage and one the recently legalized Church was not in a position to refuse.

The Church developed several arguments for its use of and expenditure on art. Firstly, it needed to be able to perform the liturgy in a suitable building and with ritual implements. Secondly, as Pope Gregory argued in around 600, imagery helped to educate and catechize a largely illiterate congregation. The twelfth-century Abbot Suger of Saint-Denis, who in some sense was the creator of the Gothic style, wrote in his defense of the artistic riches of his abbey church that the beauty of the bejeweled liturgical vessels and the aura created by the brilliant stained glass helped to raise his thoughts from the mire and sin of this world towards the glory of heaven. In truth, he was also motivated to use art in the same manner as royalty and the aristocracy. He sought to instill awe in those who might otherwise challenge the Church’s position. It was necessary to ape the trappings of secular authority to advance and protect the Church’s own claim of independence and internationalism over and above the power of local rulers. As a divinely established institution, the glory of the Church reflected the majesty of God. 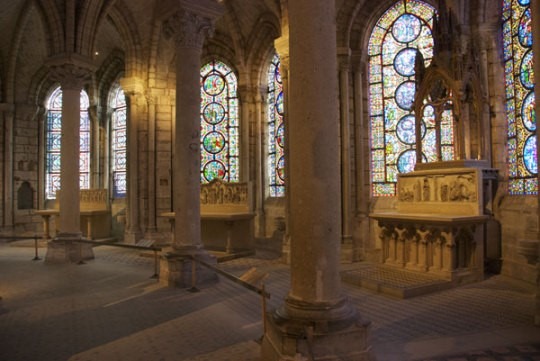 The adoption of worldly trappings of authority is beautifully rendered in The Hyde Collection’s St. Peter Enthroned (ca. 1475-1500). Here Christ’s chosen head of the Church, the first pope is regally attired like a medieval monarch. He sits on a grand sculpted throne, swathed in a bejeweled cope of rich velvet and gold threads, wearing the papal triple tiara and holding the regalia of his office: the cross and the keys to the kingdoms of heaven and earth given to St. Peter by Christ Himself. 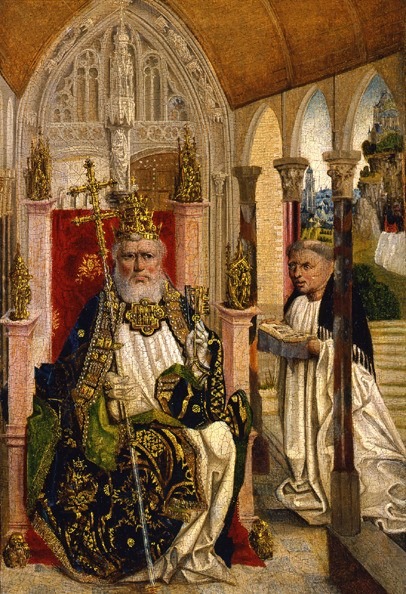 There have been moments in the Church’s history when it has banned imagery. The Orthodox Church went through two periods of iconoclasm, the destruction of imagery, in the late eighth and early ninth centuries. Calvinists during the sixteenth-century Protestant Reformation whitewashed church interiors. English Puritans decapitated sculptures and smashed stained before boarding ships and sailing for the New World where they built their stark, unadorned meetinghouses.

The Catholic Church enthusiastically reasserted the power of religious art in the Baroque period. Shaken by the Protestant Reformation, it reclaimed its authority and rebuilt itself, constructing massive, richly adorned churches. The princes of the Church were as magnificent as any lord or princeling, the Pope as any monarch. We see redecoration of churches The Hyde Interior of a Gothic Church after Pieter Neeffs the Elder (1625-50). The side altars are dressed in altar cloths and adorned with tall winged Baroque altarpieces. At the far east end of the church, through the arch of a rood screen that divided the world of the clergy from that of the laity, one can discern a high altar, bedecked with candlesticks and a colorful altarpiece. 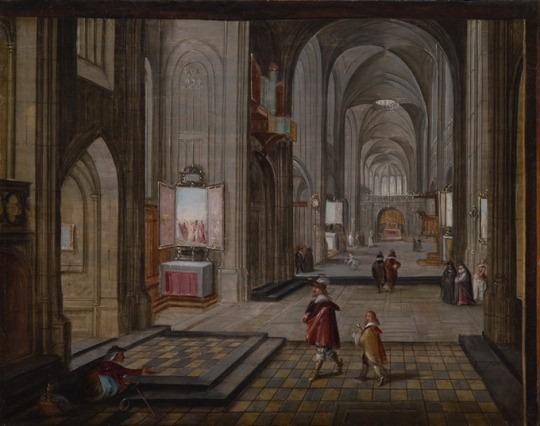 In its day, the painting would have been viewed as a confessional declaration. Protestants in the newly independent Dutch republic possessed paintings of their whitewashed church interiors. In this painting by Pieter Saenredam ( 1597-1665), the Calvinist emphasis on the spoken word over the liturgy performed at an altar is manifested in the prominent pulpit positioned halfway down the left side of the church. 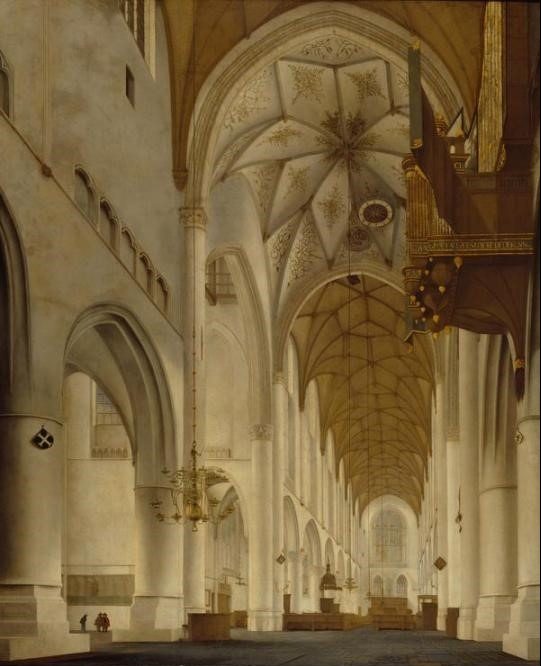 The Hydes were Presbyterian. Charlotte Pruyn’s family were descendants of Dutch Calvinists. I have always thought that a certain Reformist modesty regulated their lives and collecting. It did not affect the quality of their collection, rather it manifested itself in the scale and tone of what they collected. Hyde House is unique in its design but not ostentatious in scale or decoration. The Rembrandt is the largest painting the Hydes ever bought. In collecting religious imagery, they avoided large altarpieces, gruesome martyrdoms, and Baroque saints in ecstasy. Neither did they buy grand eighteenth-century portraits alluding to an Old World aristocratic heritage.

As patrons of religious architecture, they were governed by an elegant restraint. We see this in their patronage of Ralph Adam Cram (1863-1942) architect of the First Presbyterian Church (1927) in Glens Falls. Cram was the leading American Gothic Revival architect of the early twentieth century, the architect of New York’s Riverside Presbyterian Church. The Hydes’ archive contains many letters to Cram concerning design and decoration. They traveled into the Midwest and through New England to visit and review other churches, garner ideas, and assess the work of craftsmen. The restraint in the architectural decoration at First Presbyterian is reminiscent of that of the Cistercian movement, founded in response to the lavish decoration of Benedictine monasteries like Saint-Denis. St Bernard of Clairvaux (1090-1153), the founder of the Cistercian order, argued that for monks who were devoted to the study of the Bible, narrative cycles, whether painted on walls or glass, were an unnecessary and indeed dangerous distraction. Direct access to scripture negated the need for religious art. 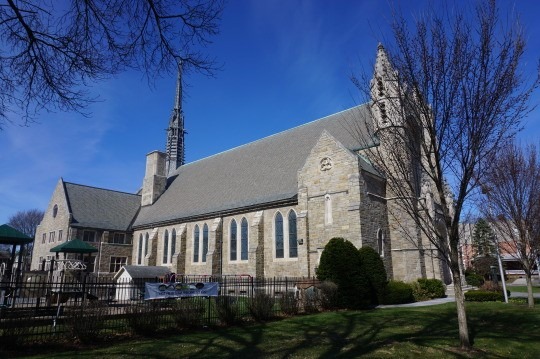 For the Hydes as collectors, religious art exemplified styles and movements within the history of Western art. They largely overlooked its religious function and meaning. Yet the art was never intended simply to be pretty. Its raison d’être lay in its liturgical role, what it taught, or the power it projected. I will examine these roles in further postings this Holy Week.