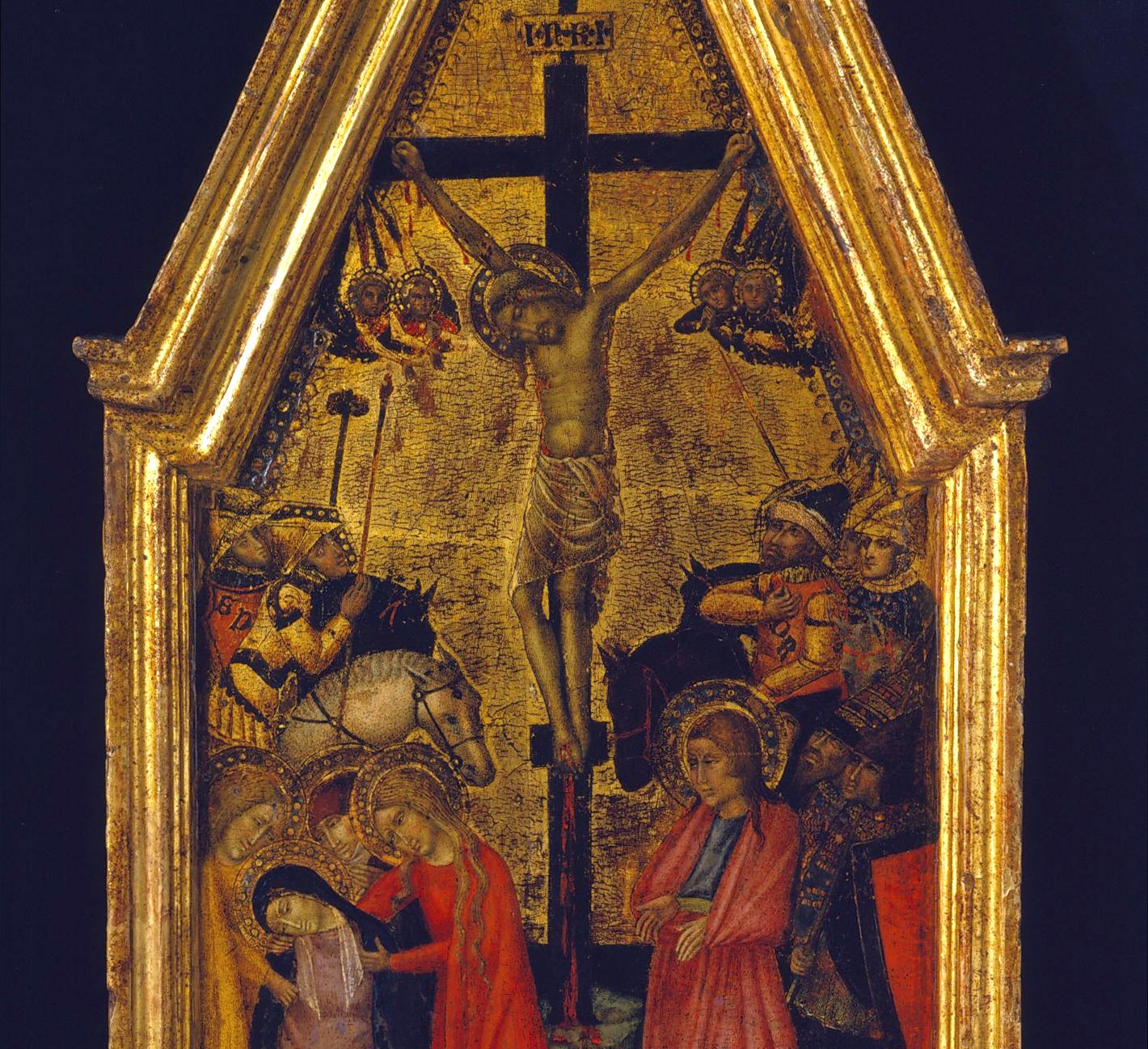 This post is an experiment. Can our current use of online communications systems provide analogies for the way religious imagery worked on and for the viewer in the Middle Ages?

While we’re at home, we can find any number of YouTube videos to watch that are intended to be educational and instructive. I have participated in a number of live webinars and meetings but my direct participation is often moderated in some way. I have to raise a hand or type a comment that may, or may not, be noticed by a moderator. Finally, there is the direct form of communication via Facetime or Zoom. Distance constricts and all participants are together, responding to each other in real time. 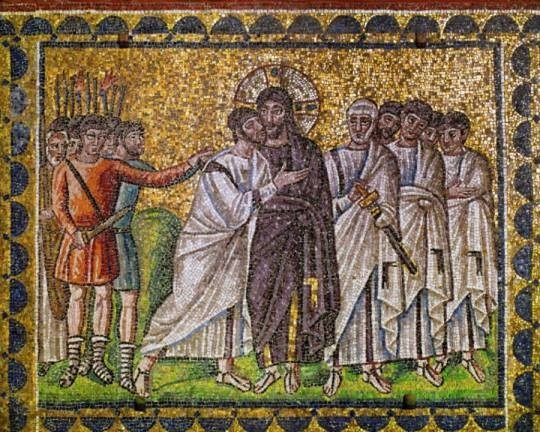 When we first study medieval art history, we are shown the grand mosaic narrative cycles in S. Apollinare (before 526) and San Vitale (525-47) in Ravenna, Italy. The churches’ architecture asserted a continuation of the Christian Roman Empire, while their decorative schemes included narrative cycles, catechizing visualizations of doctrine, and imposing assertions of imperial authority through portraits of the Byzantine emperor and empress. As the two halves of the old Roman Empire diverged, Christendom split into the western Latin Church based in Rome and the eastern Orthodox Church centered on Constantinople. The two developed different approaches to religious art. The Orthodox Church restricted the creative license of artists. God, not man, was the sole creator. Thus, tradition and authority governed religious art, more so than in the West.

The East also developed the icon. Primarily a devotional image, it was invested with a unique power. When you stand or kneel before an icon in veneration of the sainted or divine figure portrayed, you are in their presence. Communication is direct. The icon is, in a sense, Facetime. While the style and imagery of icons did infiltrate the West, we are usually taught that the West did not adopt the notion that the icon give you direct access to the person or event depicted. And yet, there were images and occasions in the western tradition when distance and time collapsed and the devout was present at a sacred event or before a holy or divine person.

As Christians have just marked Easter, I will use Crucifixion imagery to explore the analogue and digital powers of medieval art. At one level, the image of the Crucifixion signifies the story of Christ’s death, whether it tells that story in great detail, narrating the Gospel accounts, or it summarizes the story in the symbol of the figure of Christ on the Cross. Through their choice of details, the artist can elicit strong devotional and emotional sentiments in the viewer. Through the introduction of symbols, the image can become a vehicle for the articulation and propagation of theology and doctrine. But in the Latin West, when incorporated into the performance of the liturgy, the activated image can elide time and space and bring one into the Divine presence.

Known as the Equestrian Crucifixion (ca. 1350) because many of the Roman military are on horseback, this small Gothic panel at The Hyde hews closely to St. John’s account of the Crucifixion. Christ, His head wreathed with a mocking crown of thorns, is nailed to a cross atop which in Latin initials is Pilate’s scornful notice Iesus Nazarenus Rex Iudicorum (Jesus of Nazareth, King of the Jews). His mother Mary is present, accompanied by three other Marys. St. John also stands at the foot of the cross. He is the only Gospel writer to claim to have been present at the event. Christ entrusted His mother into his care. Two of the soldiers have the Latin initials of the Roman state – SPQR for Senatus Populusque Romanum (“The Senate and People of Rome”)– emblazoned on their tunics. One knight holds the reed with a sponge soaked in vinegar that was offered to Christ; another the lance by which His side was pierced. With his hands together in prayer, this knight must be the centurion all Gospel accounts record was converted to Christianity. Later, in an apocryphal account, he was given the name Longinus; his lance is a precious relic venerated in St. Peter’s Rome.

The artist manipulates the viewer’s emotions. He enhances the pathos of the scene with the image of the Virgin Mary collapsing into the arms of the three Marys. Its gruesomeness was highlighted by the trails of vibrant red blood running from Christ’s wounds. Counselled by a priest or confessor in the more affective devotional practices of the fourteenth century, the devout onlooker would have responded to these visual cues. Encouraged to place themselves at the events, the believer would have felt the Virgin’s sorrow, endured the pain of crucifixion, and lamented the role their own sinfulness played in condemning Christ to His sacrifice.

In my analogy with modern communications, this is a powerful and affective narrative in HD, but it has not broken the bonds of time and space. The devotee remains in their sinful world and bound by earthly time. 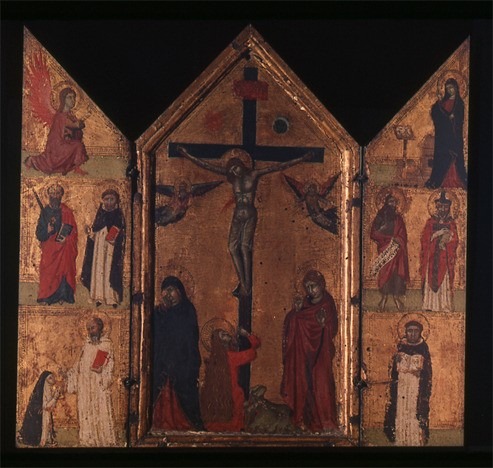 However, The Hyde’s Crucifixion Triptych (ca. 1325) had the power to break through between the earthly and heavenly spheres. The altarpiece was commissioned by a Dominican nun. We see her dressed in the Order’s distinctive black and white habit in the bottom left panel, kneeling before her patron saint, St. Romauld. She would have been well-versed in the kind of affective devotional practices taught by Dominican confessors to well-to-do women across Europe. She probably placed herself in the role of Mary Magdalen and imagined herself at the foot of the cross, her hair becoming matted with Christ’s blood as it trickled down the cross. Dominican nuns were known to translate such affective devotion into physical acts, such as fasting on the Host alone, as St. Catherine of Siena was to do within a few decades of this altarpiece’s creation.

Painted onto the wings are the nun’s patron saints, among them her fellow Dominicans, Dominic and Thomas Aquinas. Their portraits helped to focus her prayers, though there is no sense here that they behaved like icons, transporting her to their presence in heaven.

However, there is evidence that Dominicans felt that Christ could come to them through the Crucifixion image. Within the convent, Dominicans slept, studied, and prayed in individual cells, and they most commonly had an image of the Crucifixion with them, whether a painting or a sculpture. From written accounts, we know that such images were used to direct prayer, but they were also a consolation, evidence of Christ’s personal compassion for the Dominican’s life of prayer. In addition, there are stories of how Dominican while they slept felt the presence of the Divine enter their cell through the image they were accustomed to prayer before. In my modern analogy, communication can work through the image both ways, but not simultaneously. 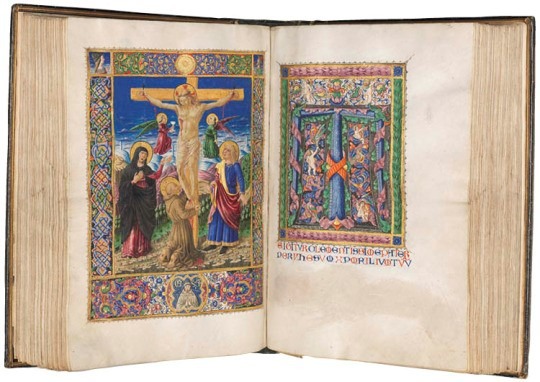 There was one specific Crucifixion image that could operate as a direct form of communication between the mortal and the divine. It was the image of the Crucifixion that adorns the Canon of the Mass in a missal. Alas, The Hyde does not, yet, possess one of these. I take my example from a stunning missal in the collection of the Cleveland Museum of Art. The Caporali Missal is a lavishly illustrated Mass book executed for the Franciscan church of San Francesco in Montone, Italy (1469). The manuscript was used by the officiating priest at the altar during the Mass. It contained the words and prayers he had to recite. The principal illuminations were the work of Bartolomeo Caporali (ca. 1420-ca. 1505), including the Crucifixion scene that opens the section of the missal called the Canon of the Mass. These are the unchanging words at the heart of the service, when the mystery of transubstantiation takes place, and the bread and wine become, in part through the agency of the ordained priest, the body and blood of Christ. The priest who officiates thus looks upon an image of the Crucifixion as it occurs anew at the altar. The sacrifice is made afresh for the benefit of those present. In that moment of the mystery of the Mass are telescoped sacred and earthly time, the eternity of Heaven and the particular moments on earth of the historical Crucifixion, the priest’s celebration, and all performances of the Mass entrusted to the care of the universal Church.

There are two particularly important details to notice in this image. Firstly, an angle holds up a chalice to collect the blood from Christ’s side wound. This is a visual assertion of the doctrine of transubstantiation. Secondly, St. Francis, who kneels in Christ’s blood at the foot of the cross, shows the marks of the stigmata, a favor shown him for his great devotion. What friar using this missal cannot have prayed for a similar benediction? 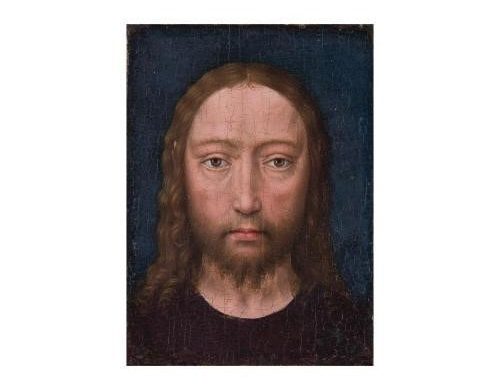 A final image of Christ in the collection to consider is The Head of Christ (ca. 1480) attributed to the School of Hans Memling. In this small devotional panel painting, Christ stares directly out of the panel. There was such a desire to know the face of the Savior in fifteenth-century northern Europe that an official portrait was created, based upon a forged text known as the Letter of Lentulus. Purportedly a report sent to the Roman Senate about Christ, it described Him as having shoulder-length hair, parted in the middle, that was the color of “unripe hazelnut,” and a forked beard. Jan Van Eyck (1390-1441) first painted this image ca. 1438 and it was repeated by Dirk Bouts (1410/20-75), Hans Memling (ca. 1430-94), and their workshops throughout the remainder of the century.

This image was undoubtedly based upon the great images of Christ Pantocrator that looked down on believers from the domes and apses of Orthodox churches, and from the icons that derived from them. But as popular as these images were in northern Europe, and as immediate the sense of His presence is in them – his face up against the picture plane – they did not behave as icons. Their particular power in the Latin West lay in their use as indulgenced devotional imagery. An indulgence was a document issued by the Church that ensured the bearer time off their purgatorial sentence for their sins. By reciting a hymn such as Salve sancta facies (Oh Holy Face) or Ave facies praeclara (Hail, splendid face) before such an “authentic” portrait of Christ, one could more speedily pass through purgatory and enter Heaven. Here my analogy breaks down because the power of this type of popular image lay not in its facilitation of communication with the Divine, but with its ability to speed one’s entry into Heaven after death, there to reside for eternity in the very presence of God. Facetime and Zoom cannot take us to the other party just yet.