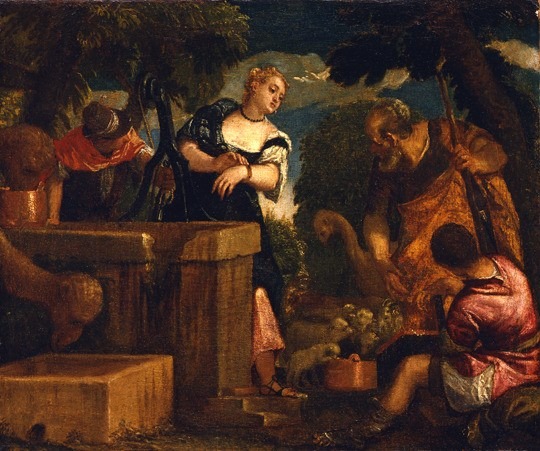 Those of you who took an Art History survey course undoubtedly learnt the name of Giotto. Between 1303 and 1306, he decorated the Arena Chapel in Padua, Italy with frescos that narrate the life of Christ. This artistic and architectural commission fulfilled the principal functions of religious art outlined in my previous posting. It provided a setting for the performance of the liturgy; it provided a visual education in the fundamental Christian narrative and tenets of the faith; and it was an expression of power, wealth, and status. The chapel was commissioned by Enrico Scrovegni (d.1336), a notable Paduan businessman whose wealth and status derived from money lending. Termed usury by the Church is was a tainted profession. Scrovegni sought to earn merit for his soul through this act of religious patronage as well as from the masses said for him and his family daily at the chapel’s altars. The beauty of the chapel’s decoration was as much a statement of his taste, wealth, and social status as it was a gift to God and the Virgin Mary, to whom the chapel was dedicated.

Giotto told the story of Holy Week, from Christ’s entry into Jerusalem on Palm Sunday to His appearance to Mary Magdalene following his resurrection on Easter Sunday, in twelve episodes. Giotto’s style was revolutionary. With simple, volumetric figures that convincingly occupied a definable space, he created dramatic tableaux that narrated the events clearly, concisely, and with great emotion. 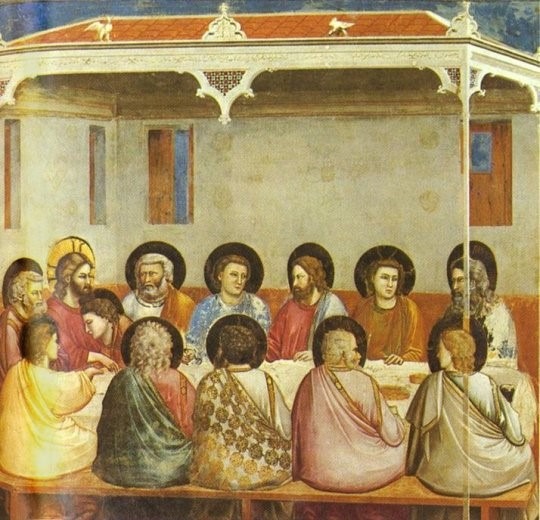 Two scenes mark the events liturgically commemorated on Maundy Thursday: Christ’s last supper with his disciples, and His washing of their feet. It is tradition in Britain on Maundy Thursday that the Queen distribute specially-minted maundy money, in lieu of washing feet, which her medieval forebears once piously did. The Pope still imitates Christ’s act of humility. 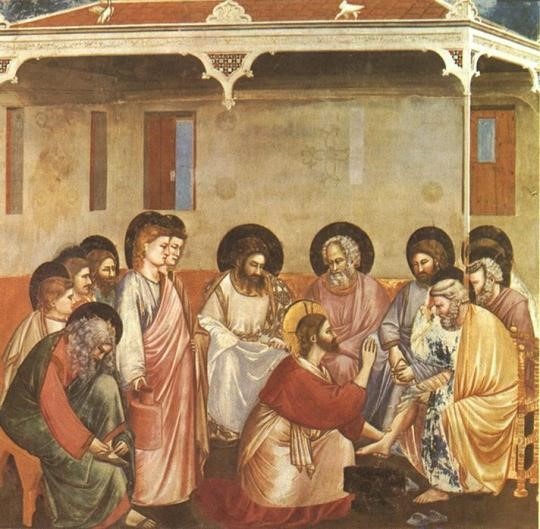 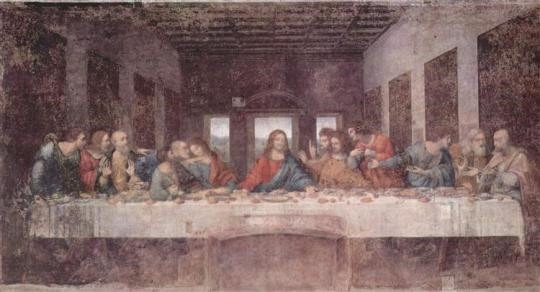 Leonardo da Vinci’s Last Supper (1495-98), must be one of the most famous religious paintings ever created. The painting performs several functions. Firstly, it narrates the apostles’ reaction to Christ’s announcement that one of them will betray him. With Christ seated in the middle of a long refectory table, silhouetted against an open window surmounted by a semi-circular pediment (Leonardo’s subtle introduction of a halo), it places Christ dogmatically at the center of the Eucharist. And finally, as it was painted on the walls of the monks’ dining hall at the monastery of Santa Maria delle Grazie, Milan, it reminded the monks that they were Christ’s latter-day disciples. Their community meal was a meal in communion with Christ and his followers. [As a side note, The Hyde’s St. James the Less from the workshop of El Greco comes from a series depicting Christ and the twelve apostles originally commissioned for a Spanish monastic dining hall.] 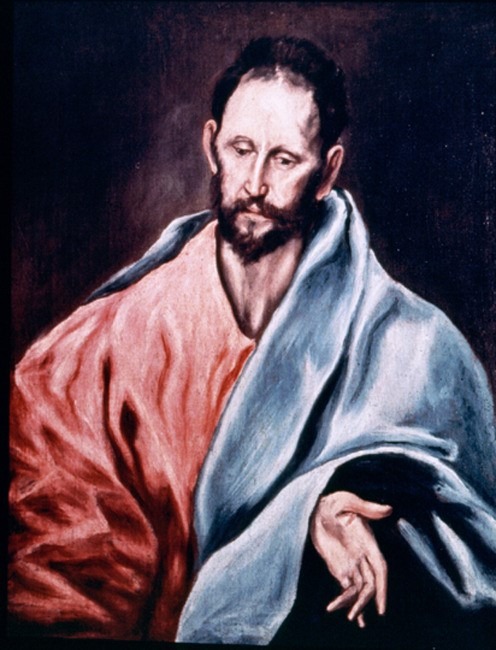 The most popular defense of religious art throughout the Middle Ages and Renaissance was that written by Pope Gregory the Great, ca. 600: “What writing (scriptura) does for the literate, a picture does for the illiterate looking at it, because the ignorant see in it what they ought to do; those who do not know letters read in it.” Pictures provided the clergy with the means of teaching an illiterate congregation Biblical stories, stories of the lives of the saints, and other essential truths. It was even possible to catechize the viewer and to convey doctrine through images.

As one walks through The Hyde, there are many examples of religious narrative art. Most have been excised both from their narrative sequence and context. Take, for instance, the jewel-like piece of twelfth-century stained glass that hangs in the main stairs of Hyde House. It depicts Christ’s presentation in the Temple. We can surmise that it was part of an Infancy cycle that depicted Christ’s birth. 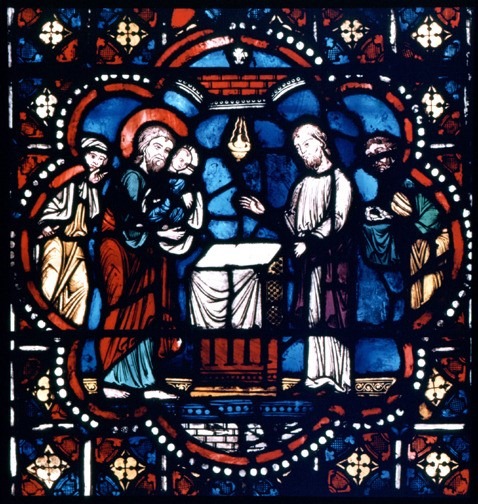 In storage, there is a second stained glass panel removed from the cathedral of Saint-Ouen, Rouen, France that depicts Christ’s Entry into Jerusalem on Palm Sunday and presumably came from a window depicting His Passion. 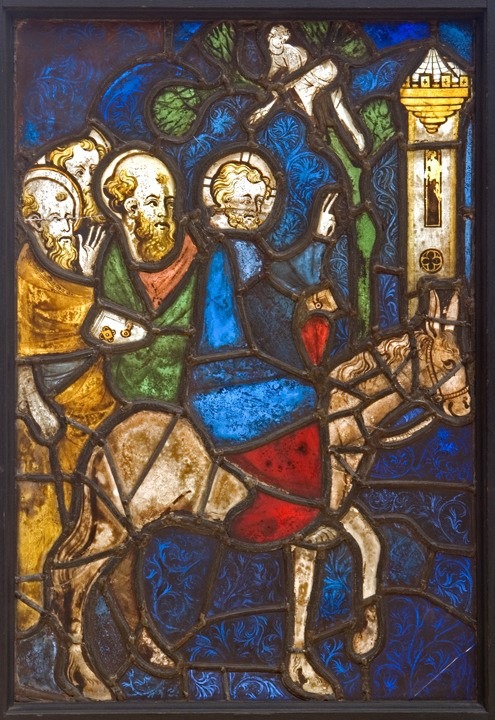 Narrative sequences commonly filled the predella or base of an altarpiece. They were invariably related to the life of the saint honored in the altarpiece above. The dimensions of the Annunciation (ca. 1492) panel by Sandro Botticelli (1445-1510) in the Music Room suggest that it was part of a predella, presumably from an altarpiece dedicated either to the Virgin Mary or to Christ’s infancy. 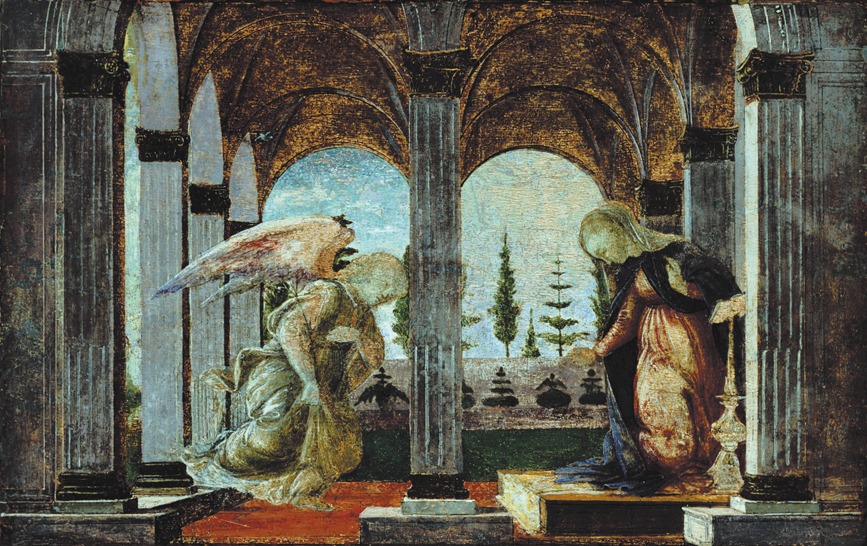 Across the room, the rectangular panel by Tintoretto depicting St. Helena Finding the True Cross is also a predella panel. The mother of the Roman emperor Constantine (272-337), St. Helena  (ca. 248-328) was famous for her discovery of the buried cross upon which Christ was crucified, and for her founding of churches in the Holy Land, particularly those of the Nativity and Ascension.

The Dance of Salome (ca. 1480) by Matteo di Giovanni di Bartolo (1435-1495) is also a predella panel. It likely brought to a conclusion episodes from the life of St. John the Baptist. 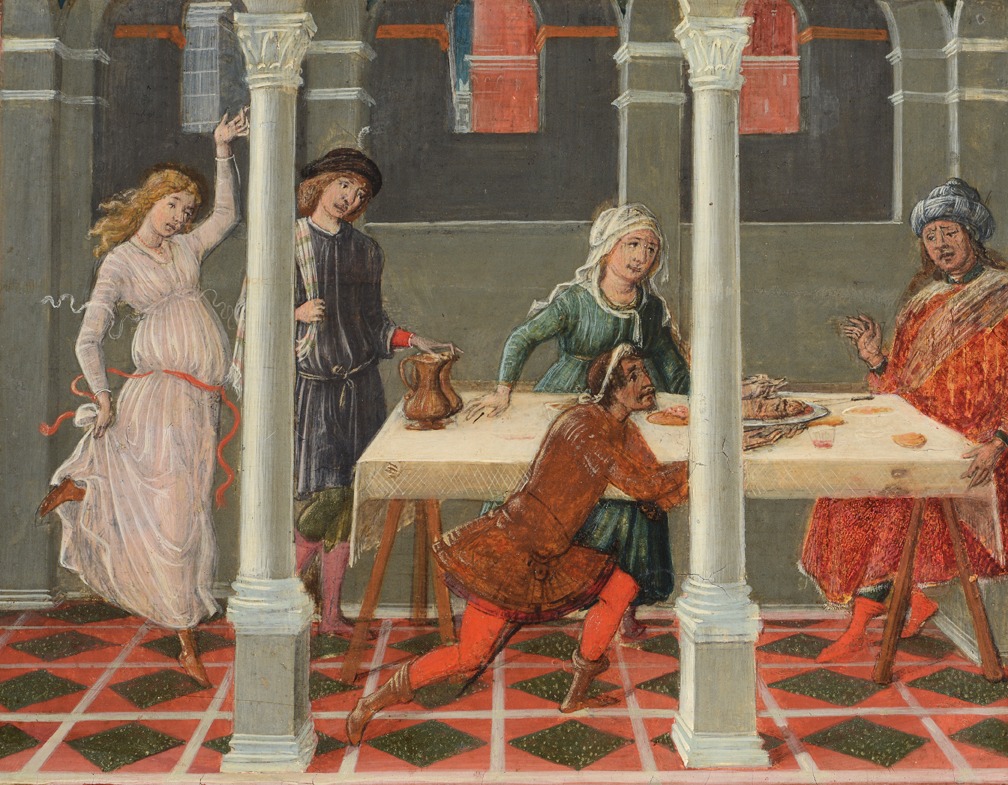 Matteo derived the scene’s composition from Donatello’s bronze font in the Baptistry in Siena (ca. 1427). The scene provided Donatello (1386-1466) with the opportunity to flaunt his ability to create the illusion of recession through the new technique of linear perspective. He created the image of three spaces, one behind the other, each connected through an open arcade. In each he set a different event. In the far distance, John’s head is carried from his cell by the executioner; in the middle room, musicians play; and in the foreground space, a servant presents Herod with the severed head. 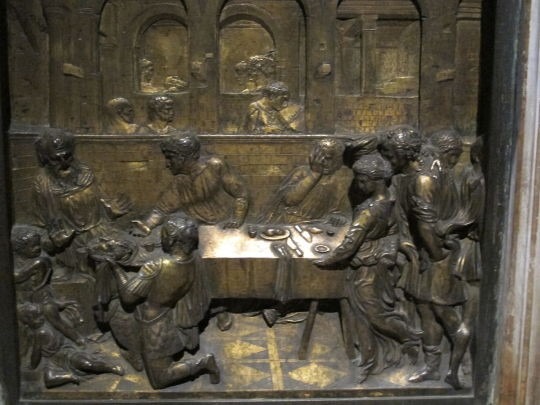 Matteo simplified the arrangement. He kept the arcaded division of spaces but removed the figures from all but the foreground scene. Rather inexplicably, he introduced across the front plane of the panel free standing columns. While they complete the architecture of the banqueting room, they disrupt the narrative, which is undoubtedly why Donatello employed artistic license and omitted them. Matteo’s servant rushes forward on bended knee in the center of the panel, but his outstretched arms are obscured by a column and the platter with the saint’s decapitated head seemingly levitates on its own. Matteo allows the rational of the architectural setting he so proudly created to disrupt the visual denouement of his narrative.

Accurate to a fault with the architectural logic of his constructed space, Matteo, probably unintentionally, recorded a fact about Renaissance interiors that we might otherwise overlook. Large halls were used for multiple purposes. At mealtimes, tables were set up and removed shortly afterwards. It is clear that Herod’s dining table is a board on trestle legs. The table in Leonardo’s Last Supper is of similar construction. Tables, benches, and chairs were collapsible as we see in these instances.

It is debatable how visible predella panels were to the congregation, as it was often kept at some distance from an altar by choirstalls and screens. The predella rested upon the top of the altar. It functioned as a stand to elevate the altarpiece’s main panel above the heads of the officiants. Candlesticks, liturgical vessels like the chalice and paten, and the bodies of the officiants would have obstructed one’s view. Predella scenes were most clearly visible to the officiants. It is interesting to note with regard to this image that the Baptist’s beheading had long been interpreted by the Church as a precursor both to Christ’s execution and the presentation of the host on a paten during the Mass. With this particular scene, the priest looked upon an antecedent to his own actions.

The most popular Biblical stories were frequently illustrated in a single scene rather than as part of a narrative sequence. The Adoration of the Magi was a very popular story throughout Europe during the Renaissance and Baroque. Artists gave free range to their imagines as they depicted eastern wise men in exotic clothing accompanied by strange animals and large entourages. Collectors enjoyed such visually pleasing paintings to look at all year round. The Hyde’s example, painted by an unknown Mannerist artist in Antwerp is typical of the type commonly found in the homes of well-to-do merchants in that city. 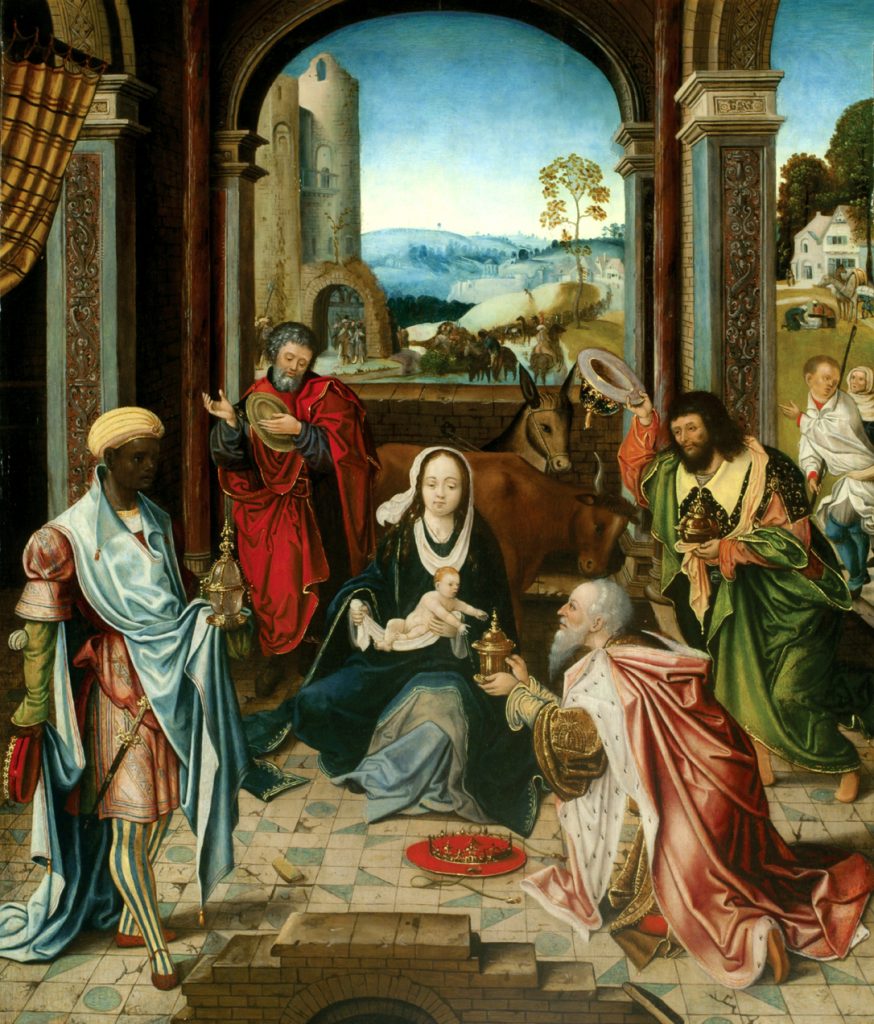 An Old Testament story not so well known today hangs over the stairs in Hyde House. It is Paolo Veronese’s Rebecca at the Well (ca. 1570). According to the story in Genesis (24: 1-28), Abraham sent his servant to find a wife for his son Isaac. The servant asked God for a sign to indicate he had found the right woman. Rebecca gave it when the servant asked for water. In return, he gave her jewelry, which Veronese has her delightedly display on her wrist.

This painting was not part of a narrative cycle, but rather a stand-alone image. If it graced a home rather than a church, it was likely intended to instruct a young girl or wife in the virtue of accepting patriarchal authority. For in the Renaissance, Rebecca was a role model for the good wife. She was maidenly and accepted the choice of husband made for her. Described as “very fair to look upon,” artists took full advantage of the opportunity to paint beautiful young Rebecca, blond and bedecked in bling.

Finally, the Crucifixion was undoubtedly the most frequently painted Biblical event. I shall examine the power of that imagery in a future post.