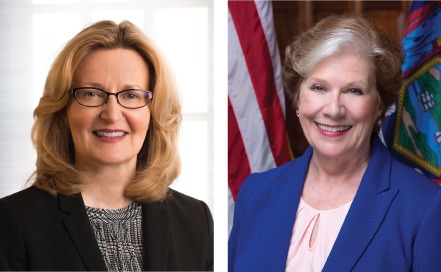 GLENS FALLS, NEW YORK — The Hyde Collection is proud to announce that The College of Saint Rose President Carolyn J. Stefanco and the New York State Department of Labor Commissioner Roberta Reardon will speak at the Museum at 1 pm Sunday, August 26.

The speakers are scheduled as part of the Adirondack branch of the American Association of University Women’s Women’s Equality Day celebration. The AAUW is a nonprofit organization that advances equity for women and girls through advocacy, education, and research.

“We are thrilled to be part of the AAUW’s celebration of women,” said Anne Saile, interim director of The Hyde Collection. “With the Museum offering exhibitions examining the careers of trailblazing women artists, the timing could not be better to have two knowledgeable, prominent, respected female community leaders featured as guest speakers.”

Dr. Carolyn J. Stefanco, president of The College of Saint Rose, served as vice president for academic affairs at Agnes Scott College in Atlanta, Georgia; as the founding dean of the College of Humanities and Social Sciences at California State University, Stanislaus; and was a tenured professor of history at California Polytechnic State University. She earned a Ph.D. in history from Duke University, a Master of Arts in women’s history from Binghamton University, and a Bachelor of Arts in history and a women’s studies certificate from the University of Colorado at Boulder. Stefanco is a trustee of the American University in Bulgaria, a board member of the International Leadership Association, and is on the Student Aid Policy Committee of the National Association of Independent Colleges and Universities. In the Capital Region, she serves on the Executive Board of [email protected] and on the Board of Directors for the Center for Economic Growth.

New York State Department of Labor Commissioner Roberta Reardon was appointed by Gov. Andrew Cuomo in October 2015 to oversee the Department’s more than 3,300 employees. Previously, she served as president of the American Federation of Television and Radio Artists (AFTRA); was the founding co-president of SAG-AFTRA, a 165,000-member union for the entertainment industry; and consulted for the AFL-CIO as Special Liaison for Common Sense Economics. She also taught in the Cornell/CUNY Labor Relations Certificate program. Reardon graduated from the Cornell Industrial and Labor Relations School’s New York State AFL-CIO/Cornell Union Leadership Institute and holds a Bachelor of Arts from the University of Wyoming. She is a Worker Institute Fellow at Cornell University and sits on the Board of Trustees for the Actors Fund of America. She is a former member of the Board of Trustees for the AFTRA Health and Retirement Fund, as well as the New York City Labor Council.

The talks at The Hyde are part of the AAUW’s District 4 convention and celebration of Women’s Equality Day, which starts at 10 am with a rally and parade in downtown Glens Falls. After the parade, in which public participation is encouraged, the convention moves to brunch at The Queensbury, where New York state AAUW President Janice Brown will speak. The Chapman Museum will also offer Women who Envisioned Women’s Equality Day, a free program with re-enactments, music, and displays.

“It is an honor to have Commissioner Reardon and President Stefanco speak on women’s issues as part of AAUW’s Women’s Equality Day celebration,” said Nan Scinta, co-president of the Adirondack chapter of the women’s group. “Their achievements are inspiring and a great example of the progress women have made.”

The presentations by Stefanco and Reardon at The Hyde Collection are open to the public and included in Museum admission. They complement The Hyde’s summer exhibitions, Jane Peterson: At Home and Abroad, which chronicles the career and travels of the famed artist, and Changing the Landscape: Women Impressionists from the Thomas Clark Collection, which showcases elite female artists whose works were forgotten after their deaths, in large part because of their gender.

Both speakers have long been leaders in their communities and respective fields.

Stefanco is part of the first generation of scholars to complete formal education in Women’s Studies and Women’s History. During her twenty-five-year career as a tenured faculty member, she directed Women’s Studies Programs and taught Women’s History at women’s colleges and research universities in the U.S. and two other countries. After becoming a full-time administrator, her research, publication, and speeches have focused on women and leadership. Stefanco is part of a national effort to diversify the leadership of higher education, and she recently served as a faculty member for the American Council on Education’s National Women’s Leadership Forum. For her lifetime commitment to advancing women, she was awarded a Helen Gurley Brown Genius Grant of $250,000 by the Pussycat Foundation in April 2018. The College of Saint Rose was also invited to join the BOLD Women’s Leadership Network with a grant of $1 million to fund programs for women student leaders over the next three years.

“I am so pleased to join Roberta Reardon, Anne Saile, and the AAUW in championing women and advancing the cause of equity. On Women’s Equality Day, we recognize the enormous efforts of the women who came before us, and the changes that are still needed to ensure that all women are able to pursue their goals without experiencing discrimination. With the #metoo movement, it is clear that much work still needs to be done, and that we must continue to advocate for change,” Stefanco said.

Reardon has been honored with the Jewish Labor Committee’s 2009 Human Rights Award, as well as the New York City Central Labor Council’s 2012 Award for Service to the Labor Movement and was a recipient of the Cornell ILR School, Union Leadership Institute’s 2017 Change Maker Award.

“There is no better place to be than standing shoulder to shoulder with a group of strong and fierce women changing the world,” Reardon said. “I am thrilled to be a part of this event.”

In 2017, Reardon co-chaired a study directed by Gov. Andrew Cuomo into the causes, scope, and economic impact of the gender pay gap in New York state. She worked with Lieutenant Gov. Kathy Hochul to issue policy recommendations to help close the pay gap. As part of the study, the Department of Labor conducted pay equity hearings in New York City, Syracuse, Long Island, and Buffalo to solicit testimony identifying specific causes of the gender wage gap and suggestions on ways in which the wage gap can be closed, either in its entirety, or in particular industries. To see the report, click here.