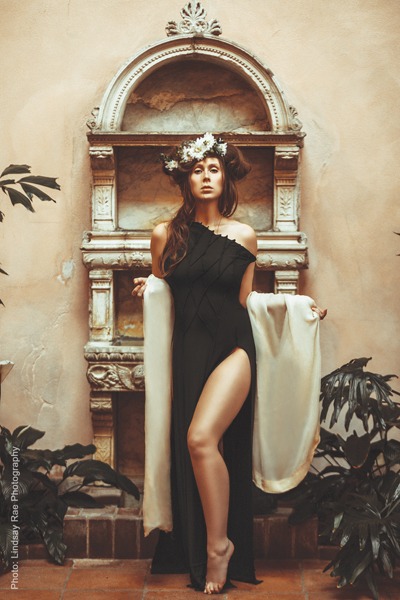 GLENS FALLS, N.Y.—When Corey Aldrich heard that an exhibition of Alphonse Mucha’s work was being exhibited at The Hyde Collection, he knew he had to create something.

But when Aldrich met with The Hyde Collection staff, the reality of holding a runway show in an exhibition with contractual limitations on photography derailed those dreams. And now he’s grateful that it didn’t work out as he first thought.

On Saturday, March 10, Aldrich’s 2440 Design Studio and The Hyde join forces to present RE-IMAGINED: A fashion and art collaboration with Electric City Couture and Design Studio 2440 from 7:30 to 9 pm.

The event — a first of its kind at The Hyde Collection — will feature fashion designs inspired by the exhibition Alphonse Mucha: Master of Art Nouveau on living mannequins contextualized in Hyde House in homage to the artist.

“Interestingly enough, the constrictions that were placed on me enhanced the creativity and made it better, because it forced me to think differently,” Aldrich said.

The works of three regional stylists, Kim Vanyo of Khymanyo Studio, Tara Holmes of Tiane Novati, and Yvonne McEachron of layered design, will be included in RE-IMAGINED. Holmes and McEachron will each style two looks, while Vanyo will unveil four new styles from a new line of custom bridal wear. Each is inspired by the artists’ interpretations of Mucha’s signature style.

“The goal is to re-envision Hyde House in a new way while creating an authentic fashion and art experience,” Aldrich said.

“Mucha’s influence can be seen throughout today’s culture,” said Hyde Educator Jenny Hutchinson. “RE-IMAGINED is a great way to examine Mucha’s impact and make connections between his distinct style and historic Hyde House,” she said.

Through his work with 2440 Design Studio, Aldrich specializes in creating event experiences that highlight an organization and form connections among arts organizations. “It’s not, ‘OK, throw some food on the table and give people beer and wine.’ I try to make it so the DNA of the place is in it, there are lots of creative angles involved, professional entertainment … and I always try to find ways to highlight and showcase the power of creative collaboration in the arts,” he said.

During RE-IMAGINED, visitors will be able to experience Alphonse Mucha: Master of Art Nouveau in Wood and Whitney-Renz Galleries. A secondary exhibition, Exploring Mucha, will be held in the Museum’s Rotunda Gallery, presenting a behind-the-scenes look at the campaign photo shoot with images and garments.

RE-IMAGINED runs from 7:30 to 9 pm Saturday, March 10. Admission is $20 and includes light fare and a cash bar. A special VIP event beginning at 6:30 pm features a first look at Exploring Mucha, viewing of the procession of eight models moving into position, an open bar reception, and a performance by Musicians of Ma’alwyck of the group’s upcoming commissioned opera Aleda — The Flight of the Suff Bird Women. Tickets to the VIP reception are $100.

Tickets are available at https://reimagined.brownpapertickets.com.