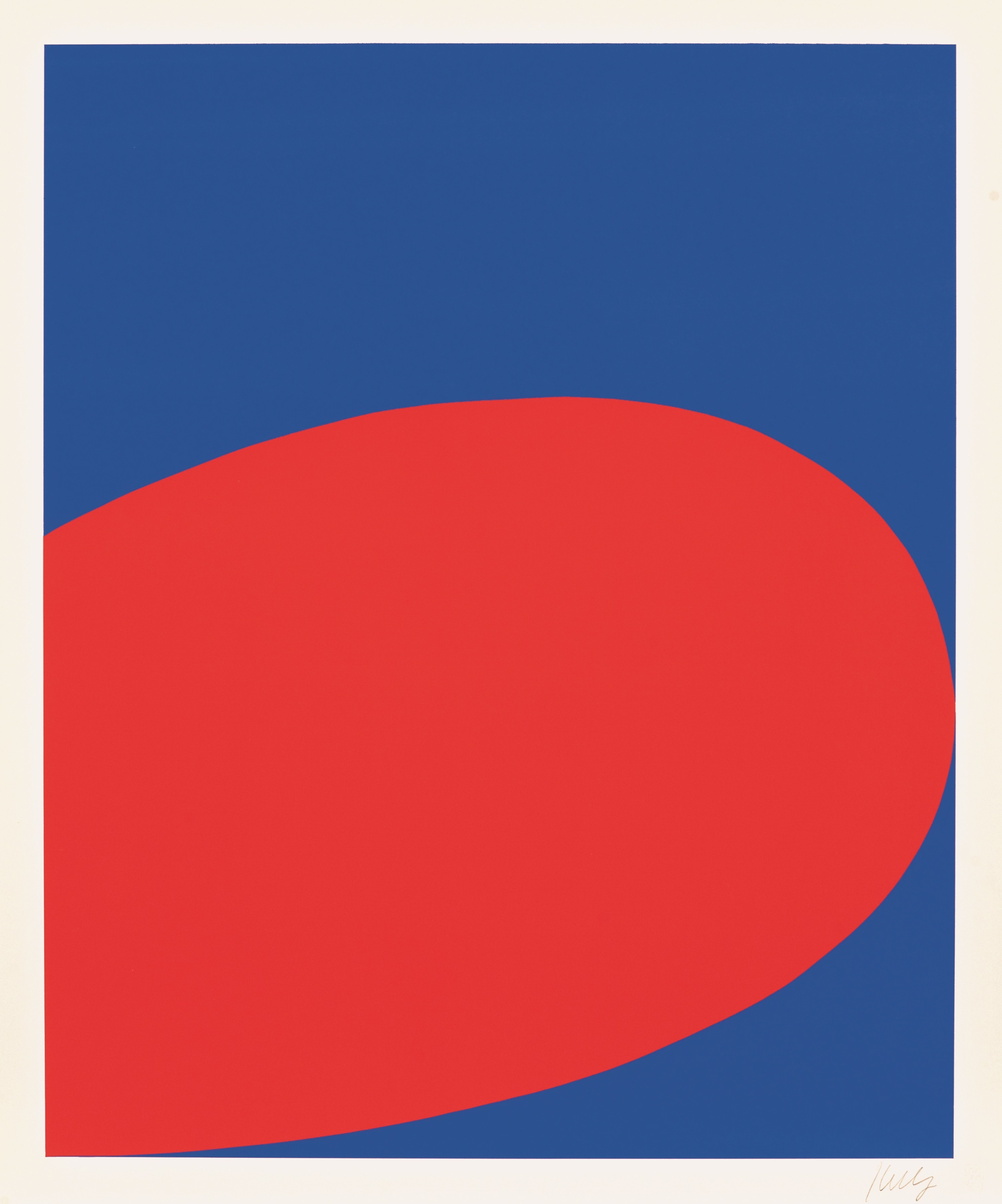 GLENS FALLS, NY — Jordan D. Schnitzer collects the works of more than 900 artists, but when he stands in a room with artwork by Ellsworth Kelly, it is as though the rest of the world fades away. “I feel an inner calm, almost a meditative state,” the Portland, Oregon-based art collector and philanthropist said.

On Saturday, June 24, The Hyde Collection opens two companion exhibitions, Ellsworth Kelly: Slow Curve, which includes seventy prints that examine the artist’s experimentation with curved fields of color, and Ellsworth Kelly: Fruits & Flowers, twenty-six lithographs that reveal the sources of Kelly’s non-rectilinear shapes. Both exhibitions are comprised of prints on loan from the collections of Jordan D. Schnitzer and His Family Foundation in Portland, Oregon.

Kelly is considered one of the most influential artists of the twentieth century, having redefined the perception of shape and color with his bold, abstract works. “(Kelly) takes forms and shapes and colors around for thousands of years and puts them together with his own personal style and message,” Schnitzer said.

Slow Curve is the first exhibition of the late artist’s works that focuses on the curve. Kelly’s affinity for the curved shape is presented in various forms: tight ellipses, broad segments, sweeping arcs, and shapes with rounded corners.

“The curve is perhaps Kelly’s most iconic shape,” said Hyde Collection Director Erin Coe, who was inspired to organize the exhibition by two works in the Feibes and Schmitt Collection, Diagonal with Curve XII, Blue #611, a shaped canvas, and Black Wave, a collage that Werner Feibes refers to as “Slow Curve.” Mr. Feibes donated his 160-work Modern art collection to The Hyde Collection in 2016, and gave a $1 million leadership gift toward creation of the Feibes & Schmitt Gallery, which opened this month at the Museum and is dedicated to the exhibition of Modern and Contemporary art. “Kelly is the artist most widely represented in the Feibes & Schmitt Collection,” Coe said. “In my mind, he was the only artist who could accompany the opening of the new gallery.”

Slow Curve will be exhibited in the Charles R. Wood Gallery, which is adjacent to the Feibes & Schmitt Gallery, where the inaugural exhibition, To Distribute and Multiply: The Feibes & Schmitt Gift, featuring four works by Kelly, is on view. “By creating a connection between the Kelly exhibitions and our new collection of postwar non-objective art, The Hyde boldly announces its commitment to Modern and Contemporary art,” Coe said.

The companion exhibition, Fruits & Flowers, reveals some of the sources for the artist’s curved shapes. Throughout his life, Kelly created hundreds of drawings of recognizable botanical subjects that formed the basis of several suites of lithographs. These contour drawings of a calla lily, camellia or magnolia blossom, lemon, pear, or grape leaf are enlarged in scale and nuanced in line and detail. Kelly once noted that his unmodulated images of fruits and flowers formed “a kind of bridge to (the) way of seeing” that underpinned his non-objective prints and paintings. The prints in both Fruits & Flowersand Slow Curve derive from the forms Kelly found in his lifelong fascination with nature.

The exhibitions are organized by The Hyde Collection and curated by Museum Director Erin Coe and Jonathan Canning, Director of Curatorial Affairs. The exhibition Slow Curveis accompanied by a brochure, featuring an essay by Coe. The exhibition and accompanying publication were made possible by the Jordan Schnitzer Family Foundation.

Widely recognized as one of the most important American artists of the past fifty years, Ellsworth Kelly (1923-2015) redefined abstract art through his bold paintings, sculpture, prints, and drawing. Born in Newburgh, New York, he studied art at the Pratt Institute in Brooklyn before joining the U.S. Army in 1943. He served in the military until 1945, and then attended the School of the Museum of Fine Arts, Boston, from 1946 until 1947. The following year, Kelly enrolled at the École des Beaux-Arts in Paris under the G.I. Bill. In France, he developed his distinctive style of painting, which features canvases painted in a single field of color. By the end of the 1950s, Kelly was internationally recognized for his canvases, which often took the shape of non-rectangular forms. In 1970, Kelly moved to Spencertown, New York. In 1973, he had his first retrospective at the Museum of Modern Art and a second retrospective at the Solomon R. Guggenheim Museum in 1996. Along with numerous gallery and museum exhibitions, Ellsworth Kelly has been awarded many honors, including the National Medal of the Arts in 2013, the nation’s highest honor for artistic excellence.

At age 14, Jordan D. Schnitzer bought his first work of art from his mother’s Portland, Oregon, Contemporary art gallery, evolving into his lifelong avocation as collector. He began collecting Contemporary prints and multiples in earnest in 1988. Today, the collection exceeds 10,000 works and includes many of today’s most important Contemporary artists. It has grown to be one of the country’s largest private print collections overall. He generously lends work from his collection to qualified institutions and has organized more than 100 exhibitions at more than 100 museums. Mr. Schnitzer is also President of Harsch Investment Properties, a privately owned real estate investment company based in Portland, Oregon, with 24 million square feet of office, multi-tenant industrial, multi-family, and retail properties in six western states. For more information about the Jordan Schnitzer Family Foundation, please visit jordanschnitzer.org. 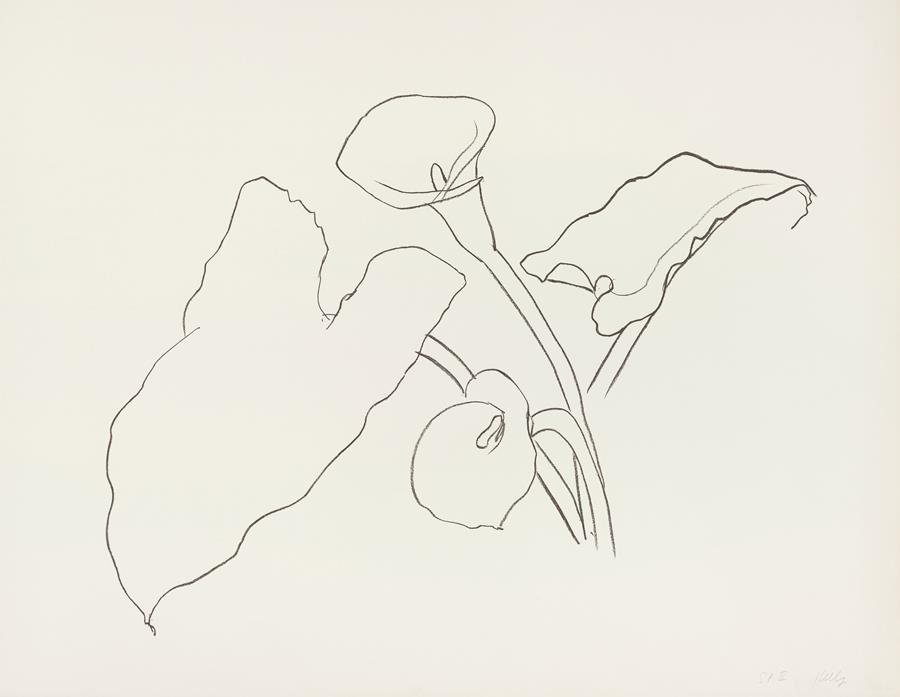 To Distribute and Multiply: The Feibes & Schmitt Gift features more than forty works of art from some of the most influential artists of the twentieth century. To Distribute and Multiplyis a selection chosen from the collection of Werner Feibes and the late James Schmitt, who donated their 160-piece collection to the Museum. The exhibition demonstrates the breadth of Messrs. Feibes and Schmitt’s collecting passion and features the works of Jean Arp, Josef Albers, Grace Hartigan, Ellsworth Kelly, Sol LeWitt, Man Ray, Louise Nevelson, George Rickey, and Bridget Riley, among others. The exhibition is open through the end of the year.