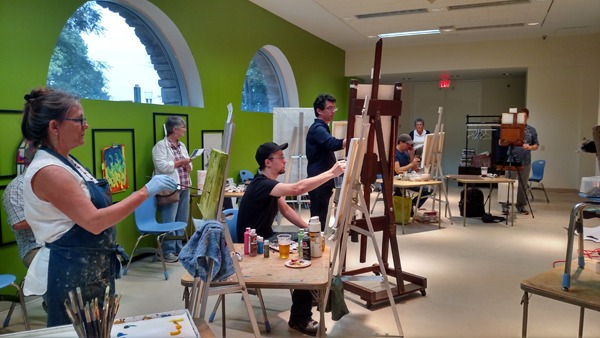 GLENS FALLS, N.Y. — The Hyde Collection is proud to announce its lineup for its second annual Hyde Night Out, a series of special evening programs. Throughout August, the Museum will stay open late Thursdays, offering a variety of events for the community.

Hyde Night Out kicks off with an August 3 screening of the BBC documentary film Georgia O’Keeffe in Froehlich Auditorium. The series continues with a “Behind the Scenes” look at the Feibes & Schmitt Collection on August 10; the Museum’s third annual Art Battle on August 17; and a dance performance in Charles R. Wood Gallery on August 23. Each week, the Museum will stay open late, with each Hyde Night Out program starting at 6 pm.

Georgia O’Keeffe is one of the most significant artists of the twentieth century. Her iconic works of distinct flowers, landscapes, cityscapes, and images of bones against the desert sky are iconic contributions to Modernism. Born in 1887, O’Keeffe grew up on a farm in Wisconsin. She studied at the Art Institute of Chicago and the Art Students League in New York City. She learned traditional realism under William Merritt Chase, among others, then was inspired by the ideas of Arthur Wesley Dow. In Dow’s emphasis on composition, O’Keeffe discovered an alternative to realism. She taught art and experimented ways to express her feelings and ideas and, in 1915, created a series of abstract charcoal drawings that represented a radical break with tradition. The works made O’Keeffe one of the first American artists to practice pure abstraction.

O’Keeffe’s art came to the attention of photographer and art dealer Alfred Stieglitz, who exhibited and promoted her work. They married in 1924. The couple spent considerable time in Lake George at Stieglitz’s family estate.

August 10 — Hyde Night Out | Behind the Scenes with ACE
Come discover the Museum in a new way as you follow clues in an art-themed treasure hunt! The Hyde Collection hosts the first of three Upstate Alliance for the Creative Economy (ACE) events in its “Behind the Scenes” series. The events provide an opportunity to network with other creative professionals. Inspired by the art in To Distribute and Multiply: The Feibes & Schmitt Gift in the newly opened gallery dedicated to Modern and Contemporary art, this free event will examine the impact of design in our culture. Other events in the series will be held at Saratoga Performing Arts Center and Yaddo. Register with ACE at www.upstatecreative.org.

The Upstate Alliance for the Creative Economy (ACE) was established to help strengthen the Capital Region’s creative economy by driving business, increasing jobs, and encouraging tourism. The collaborative group strives to offer support to creative people and organizations.

August 17 — Third annual Hyde Art Battle
Attention, creative community members! The Hyde Collection is challenging you to assemble your talented friends and family to participate in the Museum’s third annual Art Battle. We are seeking teams of three to four people to participate in our Mystery Box Challenge. Inspired by the new Feibes & Schmitt Gallery dedicated to Modern and Contemporary art, the teams will participate in a creative game of chance to unleash the most imaginative parts of their minds and work collaboratively to create a work of art. In an epic battle of creative wits, teams will create a work of art using materials provided in a mystery box. A panel of judges will select the best works of art to win special prizes. All the art will be displayed in the Museum’s Rotunda Gallery. The materials aren’t the only mystery, though. Even if you don’t have the creative prowess to compete, there is plenty of opportunity for the audience to participate.

Those interested in entering a team should contact Museum Educator Jenny Hutchinson at 518-792-1761 ext. 327 or [email protected] Admission to be in the audience is $10 for Museum members and $12 for non-members.

August 24 — Skidmore Dance Department and The Curve Effect
See the Ellsworth Kelly: Slow Curve exhibition in a new way, as dancers frame and are framed by the more than sixty prints in Charles R. Wood Gallery. Skidmore College choreographers Debra J. Fernandez and Jason Ohlberg developed Curve Effect, an interpretive dance inspired by the works of art in the exhibition. The event is free for Skidmore faculty, staff, and students, and for Hyde members, and $12 for non-members. Sponsored by the Skidmore College Arts Administration Program, Dance Department, and the Office of the Dean of the Faculty.

Hyde Night Out provides new ways for the community to interact with the Museum and its collection. To register for any of the Hyde Night Out programs, contact Kayla at 518-792-1761 ext. 310 or [email protected].

To Distribute and Multiply: The Feibes & Schmitt Gift features more than forty works of art from some of the most influential artists of the twentieth century. To Distribute and Multiplyis a selection chosen from the collection of Werner Feibes and the late James Schmitt, who donated their 160-piece collection to the Museum. The exhibition demonstrates the breadth of Messrs. Feibes and Schmitt’s collecting passion, and features the works of Jean Arp, Josef Albers, Grace Hartigan, Ellsworth Kelly, Sol LeWitt, Man Ray, Louise Nevelson, George Rickey, and Bridget Riley, among others. The exhibition is open through the end of the year.

Ellsworth Kelly: Slow Curve includes more than sixty lithographs from the collections of Jordan D. Schnitzer and his Family Foundation examining Ellsworth Kelly’s use of the curve, perhaps his most iconic shape. Throughout his prolific career, the artist experimented with curved fields of color, from tight ellipses and shapes with rounded corners to broad arcs and segments. The abstracted shapes were grounded in nature, derived from his engagement with the visible world. To bring this relationship into focus, a selection of twenty-six lithographs of Kelly’s botanical subjects is the basis of a companion exhibition, Fruits & Flowers. The exhibitions are open through September 17.