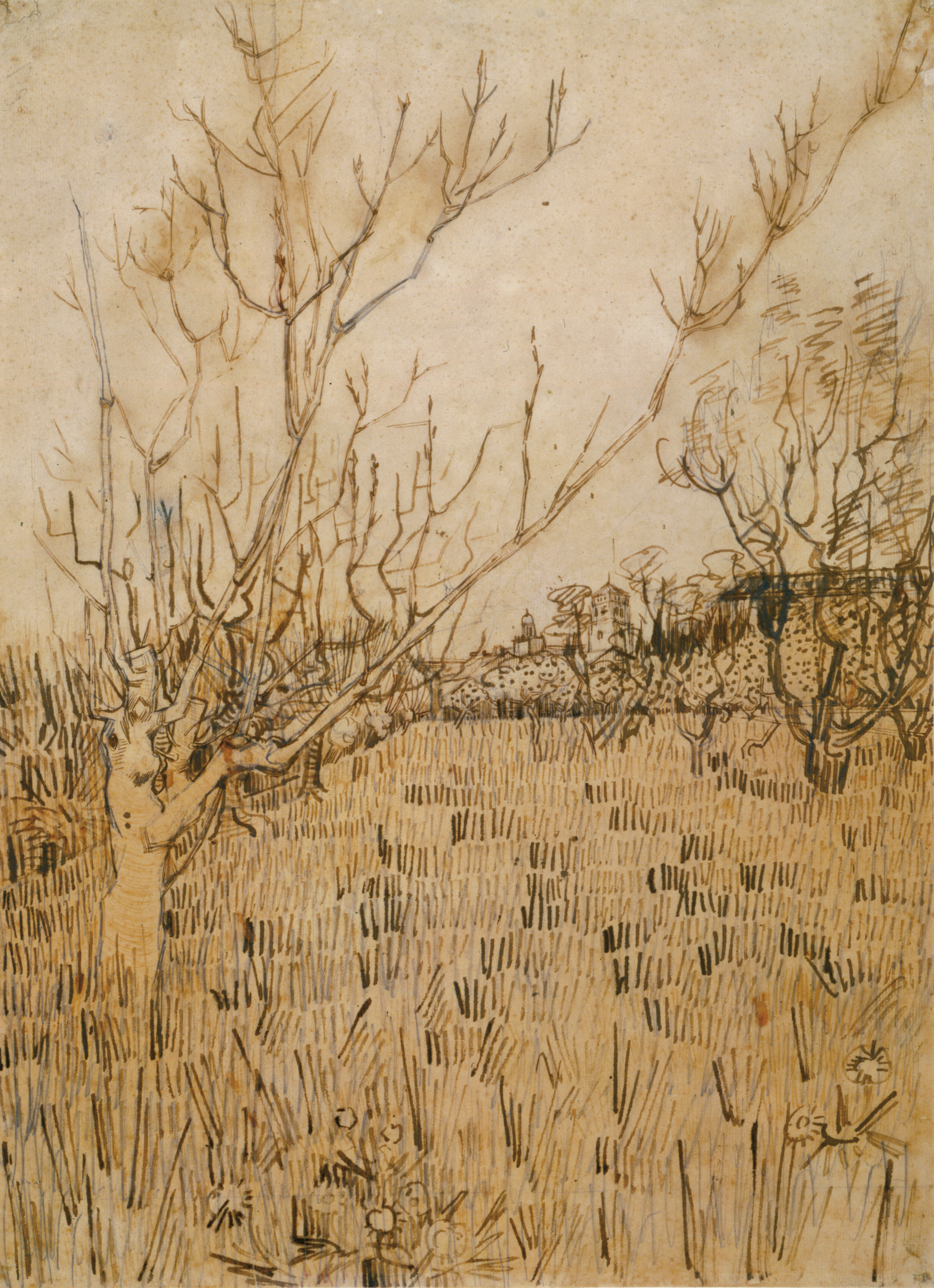 GLENS FALLS, NY — When Vincent van Gogh met Henri de Toulouse-Lautrec in Paris in 1886, the friends defied convention, challenging the established definition of art. Their idiosyncratic focus on line and color is displayed in Deux Enfants Terribles, an exhibition from the permanent collection in the Rotunda Gallery at The Hyde Collection.

The exhibition includes van Gogh’s Orchard with Arles in the Background, The Hyde’s only work by the Dutch artist. Van Gogh employed a variety of pen strokes to imbue the scene with a sense of spring’s arrival in a dormant Mediterranean fruit orchard. A few dots from a reed pen indicate the first appearance of buds. Below, the grass, rendered in short vertical strokes begins to grow again; pinwheel strokes denote the flowering of dandelions.

Believing that art should convey emotion, and driven to instill his work with his own presence, van Gogh invested this drawing with his own excitement at spring’s revitalizing influence on him after several years in hectic, urbanized Paris. That an artist sought to be so personal, so revelatory through his art was highly unconventional and controversial at the time. Van Gogh’s increasing emotional and psychological instability—1888 ended with the famous incident of his slicing off part of his ear—scandalized society.

Henri de Toulouse-Lautrec frequently defended van Gogh from such criticisms. The aristocratic Lautrec himself scandalized society with his brazen flouting of social conventions. He lived an openly Bohemian life in the Montmatre district of Paris. He enjoyed the modern pleasures of living in urban Paris. He consorted with actresses, dancers, shop girls, and prostitutes.

Six prints by Lautrec examine his embrace of modern urban culture and the opportunities it afforded an artist. Lautrec was one of the first to exploit the new medium of advertising prints. Before the advent of paper confetti, promoted in Lautrec’s bright advertisement from 1894, celebrants threw seeds and grains. The poster’s bright colors, diagonal perspective, and cropped figures derive from Japanese prints.

Social norms were under pressure. In particular, women gained greater independence and freedom. Working-class girls found jobs away from parental control in shops, where they caught the eye of wealthy men, as Lautrec records in the cover for sheet music entitled La Petite Trottin (The Dressmaker’s Little Errand Girl). Female actresses became well-known personalities in their own right as recorded in several prints in the exhibition depicting Louise Balthy and Yvette Guilbert, both friends of Lautrec.

The exhibition is timed to coincide with the Adirondack Film Festival, which takes place at venues throughout downtown Glens Falls the weekend of October 20. A fully painted animated feature, Loving Vincent, will be screened at 10:30 am and 2:30 pm Saturday, October 21, in The Hyde’s Froehlich Auditorium. Each showing includes a question-and-answer session with Ryan Chapman, one of the film’s artists.

“This is one of the most groundbreaking films to come out this year and I’m thrilled that we’re able to bring it to Glens Falls. And what better place for it than The Hyde?” said Chad Rabinovitz, director of Adirondack Film Festival. “With one of the artists from the film here for a Q&A, an original van Gogh on display, and an entire museum to explore, it’s certainly an experience you can’t get in any other community.”

Loving Vincent stars Douglas Booth and Oscar-nominated Saoirse Ronan, and is directed by Dorota Kobiela and Hugh Welchman. The film explores the life and controversial death of Vincent van Gogh, told by his paintings and the characters who inhabit them. Van Gogh created more than 860 oil paintings and more than 1,000 drawings in nine years, 120 of which were incorporated into the film.

In making the movie, 125 painting animators created 65,000 frames of the film on canvas. More than 5,000 artists applied to work on the film and those who were selected had to successfully complete a 180-hour training program before they could begin. For every second of Loving Vincent, twelve frames of individual oil paintings had to be created, taking the painters up to ten days per one second of film. The opening shot of the film alone, descending through van Gogh’s The Starry Night, contains more than 600 paintings and took three painters fourteen months to paint.

“The Hyde is proud of a long history of contributing to the region’s economy. Taking part in Adirondack Film Festival — an incredible creative and economic success for Glens Falls — helps us do that in a new way,” said Museum Interim Director Anne Saile. “We believe that the arts fuel the economy, so whenever we can join forces with other organizations, we are thrilled to do so.”

Admission to Loving Vincent is included in an Adirondack Film Festival pass, available in single- and two-day options with prices starting at $30 and running to $75 for VIP tickets. Holders of Film Festival passes will be admitted to The Hyde Collection free of charge Friday, October 20, and Saturday, October 21. For tickets to Adirondack Film Festival, which includes more than seventy-five films at six downtown venues, visit www.adkfilmfestival.org or call 518-798-7479.

Deux Enfants Terribles runs through October 22 at The Hyde Collection.

To Distribute and Multiply: The Feibes & Schmitt Gift features more than forty works of art from some of the most influential artists of the twentieth century. To Distribute and Multiply is a selection chosen from the collection of Werner Feibes and the late James Schmitt, who donated their 160-piece collection to the Museum. The exhibition demonstrates the breadth of Messrs. Feibes and Schmitt’s collecting passion, and features the works of Jean Arp, Josef Albers, Grace Hartigan, Ellsworth Kelly, Sol LeWitt, Man Ray, Louise Nevelson, George Rickey, and Bridget Riley, among others. The exhibition is open through the end of the year.