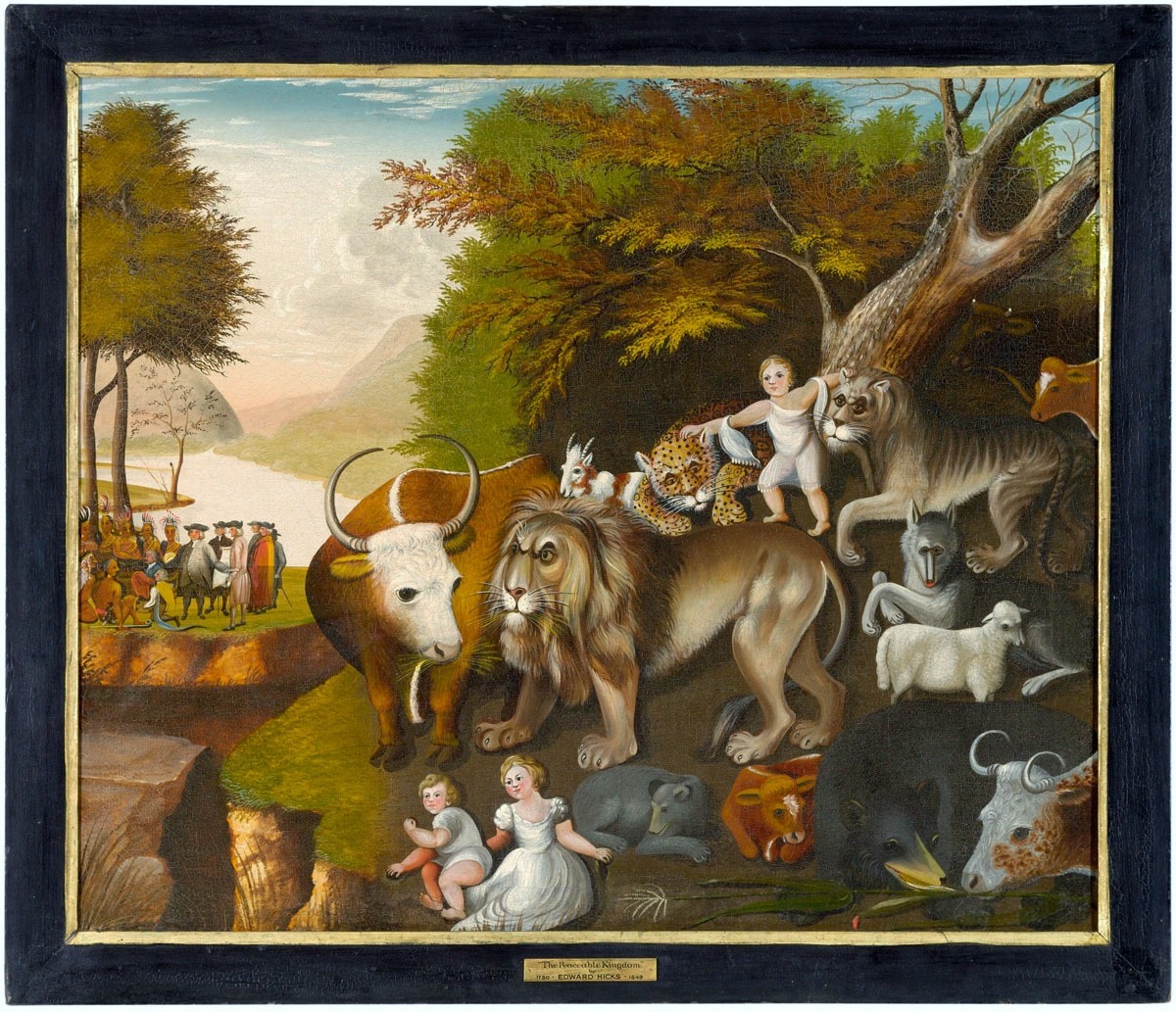 GLENS FALLS, N.Y. — Experience an exceptional exhibition of American folk art at The Hyde Collection with A Shared Legacy: Folk Art in America. The exhibition comprises more than sixty works made between 1800 and 1925, from the celebrated collection of Barbara L. Gordon.

A Shared Legacy celebrates art rooted in personal and cultural identity, made by artists who were either self-taught or had received minimal formal training. Created for ordinary people rather than society’s upper classes, folk art was the prevalent art form in the United States for more than a century.

A Shared Legacy showcases the extraordinary imagination and powerful design of regional folk artists, some acclaimed in their day and many now unknown. The exhibited works were made primarily in New England, the mid-Atlantic states, and the Midwest. They include a range of paintings (portraiture, still life, and landscape), sculpture, furniture, and trade signs. Among the paintings are iconic works by Edward Hicks and Ammi Phillips. Exuberantly painted furniture and decorated manuscripts from German-American communities are exhibition highlights.

A Shared Legacy exemplifies the preservation of personal and cultural identity in a young America, even as it began to define a national character. The works in the exhibition reflect the breadth of American creative expression during a period of enormous political, social, and cultural change.

The installation of A Shared Legacy at The Hyde is overseen by Director of Curatorial Affairs Jonathan Canning. “Barbara Gordon’s collection is stunning,” he said. “The quality is exceptional. There are such fascinating stories associated with every piece, stories that recount the lives of the artist, patron, and of a young country more than a century ago.”

This exhibition will be on view in Charles R. Wood, Hoopes, and Whitney-Renz galleries. It opens to the public Sunday, October 8, and runs through Sunday, December 31.

A Shared Legacy: Folk Art in America is drawn from the Barbara L. Gordon Collection and is organized and circulated by Art Services International in Alexandria, Virginia. It made its debut at the American Folk Art Museum in New York City and was exhibited at the Nelson-Atkins Museum of Art, the Memphis Brooks Museum of Art, the Nevada Museum of Art, and the Cincinnati Art Museum. Accompanying the exhibition is a full-color catalogue co-published by ASI and international publishing firm SKIRA/Rizzoli.

“Folk art represents the quintessential American art,” Ms. Gordon said. “It tells the story of our country in vivid colors, beautiful shapes, and forms. The paintings document individual places and memories in our history. The decorated furniture and domestic items that brought color and style to the home tell the story of daily life. Woodcarvings like the cigar store figures, trade signs, and carousel animals tell the story of commerce and recreation in earlier times. Part of the joy for me has been to live with these beautiful objects that were woven into the texture of daily life for Americans who lived a century or more ago.”

To Distribute and Multiply: The Feibes & Schmitt Gift features more than forty works of art from some of the most influential artists of the twentieth century. To Distribute and Multiply is a selection chosen from the collection of Werner Feibes and the late James Schmitt, who donated their 160-piece collection to the Museum. The exhibition demonstrates the breadth of Messrs. Feibes and Schmitt’s collecting passion, and features the works of Jean Arp, Josef Albers, Grace Hartigan, Ellsworth Kelly, Sol LeWitt, Man Ray, Louise Nevelson, George Rickey, and Bridget Riley, among others. The exhibition is open through the end of the year.

Deux Enfants Terribles examines the works of two transgressive artists in late nineteenth-century Europe. Vincent Van Gogh (1853–1890) and Henri de Toulouse-Lautrec (1864–1901) challenged the established definition of art, defying social and artistic convention with an idiosyncratic focus on color and line. The six works, including van Gogh’s Orchard with Arles in the Background, are exhibited in the Rotunda Gallery.